I have been Wiki linked

The main reason I continue to do this blog is for myself.  It gives me an opportunity to post various thoughts and projects I work on.  I have learned a lot about the history of hockey while doing research for some of my posts.  Doing it for myself helps to explain my posting frequency.  I do it when I wanna do it.
But I have to admit, I get pretty pumped when I find links to my blog.  Last year a link to my post that imagined if a certain Seals-Canadien trade had never taken place.  I stumbled across it while reading the comments on a blog entry on a popular Montreal Canadiens blog.  They sued a tiny url to link it so if I had never stumbled across that particular post, read that particular comment and bothered to click the link, I would have never known.
Another time while trying to do research for my Gordie Howe Hat Tricks blog, I found someone on a hockey forum posting a link to one of my blog posts to validate a point they were trying to make.
Just recently, I was checking my site statistics when I notice I was getting hits from Wikipedia.  My Perry Berezan: The Lost Cards post is being used as a reference for the Steve Smith (ice hockey, born in Scotland) entry.  I have no idea why they would use my post.  It just proves you should double check anything you read on Wikipedia.
While finding links takes the cake, getting post-related comments are cool too.  For the bloggers out there, do you ever check your traffic sources for your blog?  Any in particular stand out to you?
Posted by JGBlargh at 9:21 PM 1 comment: Links to this post

Email ThisBlogThis!Share to TwitterShare to FacebookShare to Pinterest
Labels: Opinion

In a previous post, I mentioned that I was a passive player collector of Marty Turco.  One card that I did seek out, but never found, was of Marty Turco in a Bruins uniform.  I am pretty sure one was never made, or at least a base card was never made.  Turco, who was an unrestricted free agent, wasn't able to secure a deal with a NHL for the 2011-12 season.  After playing for Team Canada at the Spengler Cup, he signed on in Austria, which included an out-clause for any NHL team.
During the 2011-12 season, the Bruins had a deadly duo of goalies in Tim Thomas, and Tuukka Rask.  Then Rask went down with an injury at the start of March.  The Bruins didn't have another goalie in their system who was NHL ready and they didn't want to overwork Thomas before the play-offs.  Unfortunately for the Bruins, the trade deadline was February 27th, which was a few days before Rask was injured, so Bruins had to look at free agents.  Marty got the call.
Turco struggled with the Bruins.  He played in five games, winning two and losing two.  His 3.68 GAA and .855 save percentage were not in the same ballpark as the other Bruins goalies, 2.26 GAA and .926 Save percentage.  His brief time with the Bruins was not good.
Turco was once again a UFA in the offseason, and once again, was unable to find work.  He held out hope until he finally announced his official retirement in January of 2013.
No card company bothered to make a Marty Turco Bruins card.  I figured Score would have been the best bet to have included Turco, so here`s my version of a 2012-13 Score Marty Turco card.

So ugly, I ain't gonna buy it

I am not much of a player collector, but I do passively collect Mike Bossy, Matt Martin and Marty Turco.  So when I recently found out that Marty Turco had a card in the 2013-14 Team Canada set, I was a bit excited.  Except imagine my horror when I saw the following. 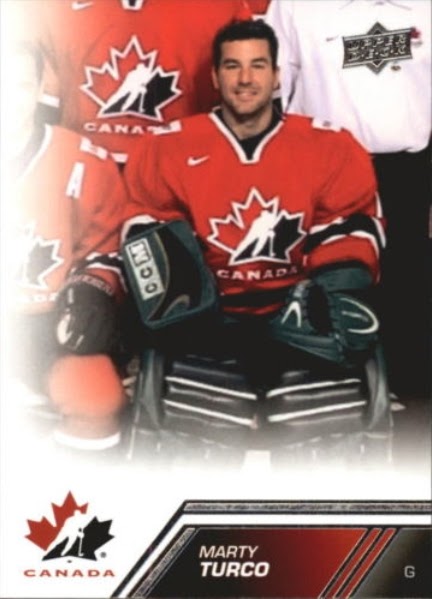 What an ugly card!  It's from the team picture for christ's sake.  If you can't find a decent picture, why even put they guy in the set?  There's pictures of Turco from the year he played in the Spengler Cup, couldn't they use that?  Or is the Spengler Cup not prestige enough when compared to cropping a team photo?  I am not buying that card.
Have you refused to buy a card of player you collect, just cause it's too damn ugly?
Posted by JGBlargh at 10:48 PM 1 comment: Links to this post