Group Break: My First Ever

I have always been curious about group breaks.  The high end boxes are a high-risk, high reward proposition, so group breaks give collectors a chance to be involved in a high-end break without breaking the bank.  You pay the fee, and hope you get a good team for the break.  It's like watching the lottery live and praying for the instant win.  I had been eyeing them for awhile over at Clouts and Chara.  Eventually I took the plunge and got the Blues... literally.

The break was a  23 box "Monster Break". The boxes are listed below.  So I took the plunge with both feet and sent over $140 to be part of the event.  It took a while to fill the group break and I was actually having supper when they created the random draft order.  I came back just in time for the picks to start.  So you can imagine my anticipation as the announced the current pick and next pick.  I had no idea where I was.  Of course I wanted top 5 but I would been happy with getting a chance to pick the Islanders.  But the top five past without my name.  Then the Islanders got drafted and then we went past the top 20 without my name being called.  Finally at pick #25, my name was called.  I had my choice of either the Blues or any team in the Southeast division.  As mentioned above, I got the Blues, both as my team and for my emotion.  My first group break ever and even before it started I lost interest.  Sure, I really like David Backes and the Blues have a great goalie tandem, but there is no Wow factor with the Blues.  There aren't even any great legends with the Blues.  Any HHOF who played with the Blues made the HHOF based on thier play with out teams.  Such as Gilmour, Plante, Hall, or Fuhr.  Can anyone name a top rookie from the Blues in the past two years, other than Cade Fairchild?  Huh, who?  Any ways, let's see what boxes will be broke and my bounty.

The boxes above were broke in reverse order of the listing.  So it it took about 8 boxes before my first hit. 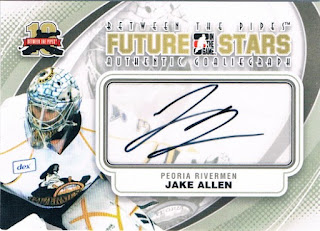 Jake "22" Allen is a solid young prospect who moved up the depth chart after the trade of Ben Bishop.  I could have bought this on eBay for $6.57 including s/h. 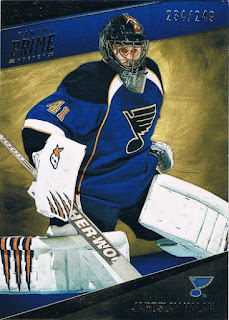 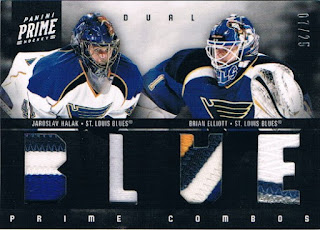 I finally got something to be excited about.  Brian Eliott and Jaroslab Halak patch card #/25.  I can count 5 colours in those patches.  Definitely a card to get excited about.  Too bad it won't get me even remotely close to breaking even on the break.  Past five auctions have ended between $20 and $26 including shipping.

At this point there is about 4 boxes of Prime left and a tin of the Cup.  The Blues threw up a shutout in the remaining boxes.  So in the end I paid about $140 for what I could have bought on eBay for under $40.  I don't even think that was the worst of it.  The worst was that I lost interest.  There was no big rookie or star I was hoping get pulled for me.  It was several boxes between hits and it was the freaking Blues.  So not only did I not get my value in cards, but I didn't get the excitement value either.

Will I ever do it again?  Probably.  The break was well run.  And what are the chances of me getting a bottom 6 pick again?  When will I ever learn?