Two of two received from Dave Poulin, c/o The Toronto Maple Leafs.  I think he signed the card sideways.  I can't make out his name regardless of which way I hold them.  It's a unique signature.  Dave Poulin won the Frank Selke trophy in 1987 and played in three Stanley Cup Finals,  two with the Flyers and 1 with the Bruins.  All three were against the Edmonton Oilers and Dave's team lost all three.  Poulin played 13 years in the NHL and his team made the play-offs every season. 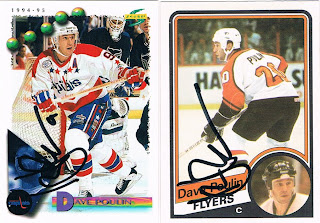