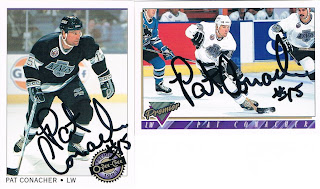 Pat Conacher played in the NHL for parts of 13 seasons.  He was part of the Stanley Cup winning Edmonton Oilers in 1984 and also helped the Los Angeles Kings to the Cup Final in 1993.  A defensive specialist, Conacher had his best seasons with the Los Angeles Kings.  Mr. Conacher signed 2 of 2.  The cards were sent October 20th and came back December 12th.  Conacher is currently the head coach of the Regina St. Pats of the WHL.