I received my first ever order from Miraj Trading.  I received three boxes including a box of 2003-04 Pacific.  I ordered hoping to hit a few nice inserts and some cards for two of my projects, TTM and One Star, One Sheet.  Here's how it went. 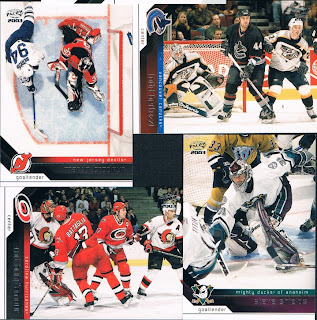 I like the card design and I certainly like the photography overall.  Some of the photos are very original and full of action, but others are just too full of action.  The cards backs are one of my all-time favourites.  The card back includes a head shot, yearly stats for the player's entire career, some informative tidbits and the teams logo in the background.  The only item missing was the player's birthplace.  I was almost considering to collect this set until I started seeing the same cards over and over again.  A box of 2003-04 Pacific is made up of 2 mini-boxes of 18 pack each and 10 cards to a pack.  Out of my 360 cards, I got 40 inserts.  Out of the 320 base cards, I got 64 doubles and 3 triples.  The unique rate of base in this box was a pathetic 79%.  Good for a B+ in school, but a D- for a card box.  With only 253 cards out of a 400 card set, I don't think I will doing this set and this one will strictly be for projects. 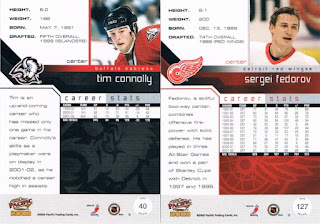 The other reason I won't be collecting this set is that one of my mini-boxes had some issues.  I had to literally snap the cards apart.  The cards were actually making cracking noises as I took them apart.  Most cards came away unharmed but 2-3 in each pack had residue stuck on the card, including this Red Parallel of Mario Lemieux.  The other mini-box had some cards stuck together but nowhere near as many or any damage to them. 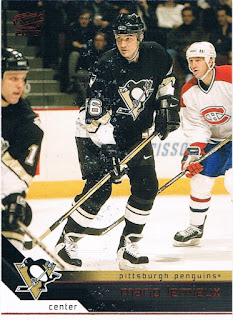 2003-04 Pacific has two levels of parallels, Red and Blue.  Red come one every two pack and the Blue come one per box and is numbered to 45.  I ended up with 19 Red Parallels and a Blue Parallel of Mark Bell. 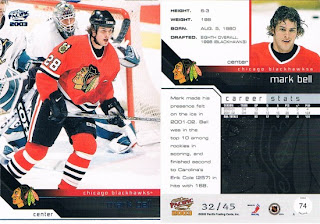 There are 6 insert sets available in the 2003-04 Pacific.  I'll save the suspense and tell you I didn't get any Cramer's Choice Awards, 1:732 packs.  Impact Zone comes in at 1:9 packs and has 10 in the set.  I beat the odds and got 6 Impact Zones; Mario Lemiex, Jarome Iginla, Brendan Shanahan, Teemu Selanne and 2 Joe Sakics.  So even with the inserts I was getting doubles. 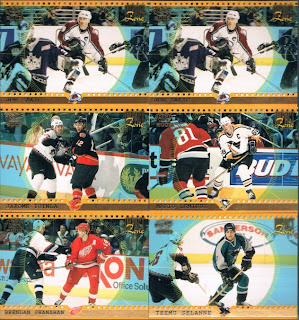 Maximum Impact is a 16 card insert set made up of goalies.  It comes 1:12 packs.  I got 5 in my box, beating the odds by 2.  I got Dominik Hasek, Jose Theodore, Evgeni Nabokov and 2 Curtis Joseph.  Yes, another double. 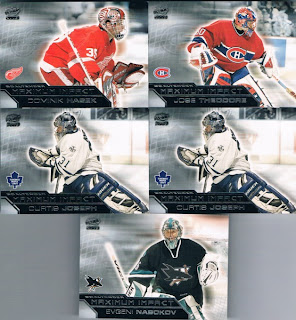 The most attractive inset set, Main Attractions is a 20 card inset set with odds of 1:12.  Of course the inset set I like the most, the odds are correct.  I got Keith Tkachuk, Jeremy Roenick and Jose Theodore.

Lamplighters is a 14 card set showcasing some the NHL's top snipers, circa 2003.  The odds are 1:20 but I got two, Dany Heatley and Mats Sundin.

The box also touted 2 Game Used Jersey cards.  My first pull was Jiri Dopita.  Not a great name but I actually like the design of these. 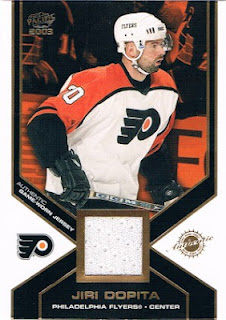 My second GU was a better name and a Holographic Silver Variation to boot.  Jaromir Jagr, number out of 40.  Books for about the same price I paid for the box, including S/H.  Plus it has a nice shiny box in the middle of the card. 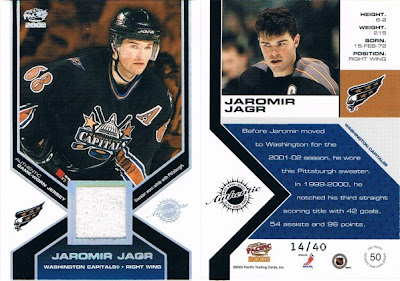 Overall, I was disappointed with this box.  The damaged cards were a bummer, especially the Red parallel of Lemieux, but the amount of doubles I was getting is unacceptable, especially once I started getting doubles of inserts.  The dispersal of inserts was strange as well.  I got 5 of the Impact zone in one of the 18 pack mini box and all the Main Attractions in the other.  While the set gets high marks for photography and back design of the base cards, I can't justify laying down more $$ to buy another box or to buy singles to complete the set.