Ken Daneyko is not the typical player I would feature on a Lost Rookies post.  While it did take OPC six seasons before they included him in a set, Daneyko played 20 seasons in the NHL, all with the New Jersey Devils.  So there are plenty of card of Daneyko in a  Devils uniform around, although his 1989-90 OPC rookie was a dreaded warm-up shot.
The early pictures of a baby-faced Ken Daneyko quite surprised me.  For some reason, I always assumed Ken Daneyko was born as a balding stubbly grizzled faced middle-aged man.  It was also a suggestion made by gregory, who also runs a blog that features quite a bit of hockey.  So with that motivation, here we go with the Lost Rookie of Ken Daneyko.
One of the interesting things about Daneyko is that he started with the club in the Mickey Mouse years and lasted until the Devils were 3x Stanley Cup champs.  Daneyko was the epitome of the crease-clearer defenceman.  In 20 seasons, Daneyko scored 36 goals, 178 points, and had 2516 PIM in 1283 games played.  Daneyko once went 256 regular season games without scoring a goal (1999-2002).  He is the Devils/Rockies/Scouts franchise career leader in games played and PIM.
As for that interesting bit mentioned above, Daneyko was injured about two weeks before the "Mickey Mouse" game against the Oilers in 1983.  His injury cost him the majority of the 1983-84 season, including any chance of returning to the Devils that season.  He only played one game with the Devils in 1984-85.  So he somewhat missed the Mickey Mouse era.
Daneyko's final NHL game was the game 7 victory in the 2003 Stanley Cup finals over the Anaheim Mighty Ducks.  Earlier in the play-offs, he had suffered a rib injury, which caused him to miss 10 of the Devils final 14 play-off games, including the first six games of the Finals.  Prior to the injury, Daneyko had played in all 165 Scout/Rockies/Devils franchise play-off games.  He returned to play his final NHL game in game 7, a 3-0 victory, for the Devils third Stanley Cup in 10 seasons.
Daneyko won the Bill Masterson trophy in 2001 for Perseverance.  Daneyko had troubles with alcohol which culminated during the 1997-98 season.  He was granted a leave of absence while he checked into rehab.  He beat his demons and would go on to help the Devils to win Cups in 2000 and 2003.
It's incredible to think a player could spend 20 seasons with the same franchise in the free agent era, especially when that player isn't a HHOF calibre player.  It shows quite a bit of loyalty by the Devils and by Daneyko.

I also found this picture of Ken Daneyko.  This is exactly how I pictured a baby faced Ken Daneyko.   An angry face full of stubble.  This was how I assumed Daneyko looked on the day he was born, except he would be missing his two front teeth.

Drafted 2nd overall in the 1974 draft by the expansion team, the Kansas City Scouts, Wilf Paiement entered the league with high expectations and retired as the second best player to wear the number 99 in NHL history.
Paiement had 82 points in 135 games over two seasons with the atrocious Scouts.  The NHL had doubled in size in 1966, from 6 to 12 teams, and added another six between 1970 and 1974, then include the WHA's vying for talent and the talent pool was quite diluted for the Scouts.  The Scouts performed as bad at the box office as they did on the ice.  The Scouts only lasted two seasons in Kansas before moving to Colorado, becoming the Rockies.

While the Rockies continued to perform poorly on the ice, Paiement led the team in scoring for three straight seasons, amassing 228 points in 223 games.  During this time, Paiement earned the reputation as a dirty player, due in part to his antics at the 1977 World Hockey Championship for Canada.  Then at the start of the 1978 season, Paiement solidified that reputation with a stick swinging incident against Dennis Polonich.  Paiement was suspended for 15 games.  At the time, it was the second longest suspension in NHL history for an on-ice incident.  Polonich would later sue Paiement over the incident, and be awarded $850k.  Paiement finished the season as the Rockies leading scorer, netting 60 points in 65 games.
Paiement was traded to the Toronto Maples Leafs in the infamous Lanny McDonald fiasco.  Wilf already had big shoes to fill by replacing McDonald, but then also switched to jersey number 99.  He is only one of three players to ever wear the number 99 in the NHL.  Wilf originally lived up to expectations as he led the Leafs in scoring, while setting a career high, with 97 points in 1980-81.  The following season, Paiement, and the Leafs, struggled.  With the Leafs being 10 points out of a play-off spot at the trade deadline, and Paiement only netting 58 points in 69 games, the Leafs traded Paiement to the Qubec Nordiques for Miroslav Frycer.
Paiement chose a new jersey number, and finished the season strong, scoring 13pts in 8 games for the Nords and added 12 more points in 14 play-off games.  Paiement played in a support role for the Nordiques, whom already had future HHOFers Peter Stastny and Michel Goulet.  Paiement had 223 points and 680 PIM in 280 games with Quebec.  The team made the Wales Conference Final twice during Paiement's time, losing both times, in 1982 and 1985.
Paiement struggled with Quebec during the 1985-86 season and was traded to the New York Rangers.  Paiement was part of the Ranger's cindarella play-off run.  The Rangers, who barely made the play-offs, upset the top two teams in the Wales Conference before losing to the Patrick Roy and the Montreal Canadiens.
Wilf was left unprotected in the 1986 waiver draft and was selected by the Buffalo Sabres.  He scored 20 goals in 57 games for the Sabres.  Paiement signed as a free agent with the Pittsburgh Penguins the following offseason, resulting in OPC airbrushing him into the set.  Paiement played more games in the minors than with the Penguins in 1987-88 and retired at the end of the season.
Paiement was a tough, although sometimes dirty, player.  Over his career, he had 16 Gordie Howe Hat Tricks, just two shy of Rick Tocchet's record.  Paiement  retired with 356 goals, 1759 PIM in 946 career games.  A very good player, who had the right mix of offense and truculence for the era he played in.
Paiement was a victim of the OPC cutbacks as he was left out of the 1985 and 1986 sets.  He never had a card produced of him as a New York Ranger, nor as a Buffalo Sabre.  I could not find reasonable pictures of Wilf as a Ranger or Sabre.  I would be grateful if anyone could steer me towards one.  Although I am able to present a career capper for Wilf as a 1988-89 OPC Lost Card. 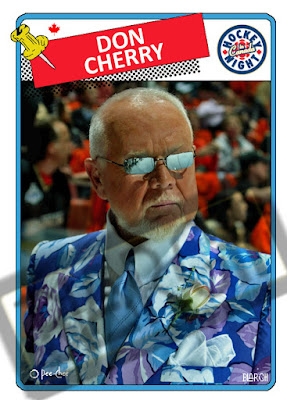 On a side note, I have been in the process of moving.  I am beginning to settle in and plan on being back to weekly Lost Cards posts next week.
Posted by JGBlargh at 11:44 PM 2 comments:

Email ThisBlogThis!Share to TwitterShare to FacebookShare to Pinterest
Labels: 88-89 OPC, Opinion
Newer Posts Older Posts Home
Subscribe to: Posts (Atom)
All pictures are fan art. They are watermark to prevent copying and posting to eBay. I have seen copies on eBay in the past.