Dave Gagner was highly touted entering the 1983 NHL Entry Draft.  The big knock against Dave was his size, 5'10".  Although ranked as the 7th or 8th best prospect, Gagner was still on the board when the New York Rangers scooped him up as the 12th overall pick.
Before signing with the Rangers, Gagner joined the Canada National team and represented his country in the 1984 Olympics.  Gagner led Team Canada with 5 goals and 7 points.  He would go home without a medal as Canada, finishing fourth, was shutout in its final three games.


Gagner made his debut for the Rangers season opener in 1984.  He scored his first goal, a shorthanded marker, against Pete Peeters of the Boston Bruins on October 28, 1984.  Gagner struggled to find ice-time with the Rangers during his three year tenure with the team.  Splitting time between the New Haven Nighthawks of the AHL, and the Rangers of the NHL, Gagner scored 27 points in 80 NHL games over three seasons.  A change of scenery didn't jumpstart Gagner, as he was traded to the Minnesota North Stars for the 1987-88 season, netting 19 points in 51 games.  Gagner did start to find his stride as the season progressed, scoring 15 points in his last 22 games.
Gagner did get a great start to the 1988-89 season.  Playing on a line with Stewart Gavin and Basil McRae, Gagner scored 4 points vs the Boston Bruins in the season's second game.  Gagner eventually played himself onto the top line and finished the season as the North Stars leading scorer.  Gagner led the North Stars in scoring twice and topped the 40 goal mark twice during his time as a North Star.  In 1991, the North Stars lost in the Stanley Cup finals to the Pittsburgh Penguins.  Gagner had 27 points, and led the team with 12 goals.  He led the team with 6 points in the finals.
The North Stars changed their name to the Stars and moved to Dallas in 1993.  Gagner moved on in 1995, in a trade that sent him to the Toronto Maple Leafs.  In Gagner's final four seasons, he would suit up for five different teams (Stars, Leafs, Flames, Panthers and Canucks).  He retired in 1999.
Perhaps my favourite hockey card of all-time is Dave Gagner's1991-92 Pro Set Platinum card.  There is something about that action shot that gives me the giggles.  Dave did get a rookie card in the 1988-89 OPC set after his first season in Minnesota.  He never got a New York Rangers card, so here is his Lost Rookie card, from the 1985-86 OPC set.  Also, a bonus 86-87 OPC of Dave.

Was looking at some Mike Bossy cards on eBay and I figured I'd quickly whip one up using a template I previous made for Fleer Ultra.  Then why stop there.  So here are five Islander Legends from the 80s Dynasty.  No big write-up needed. 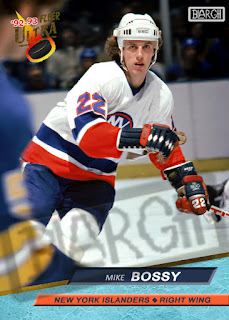 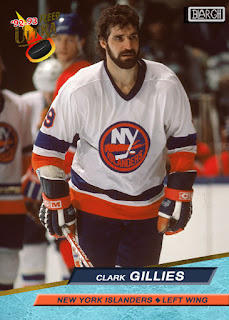 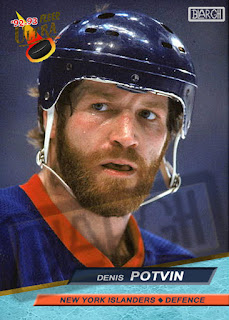 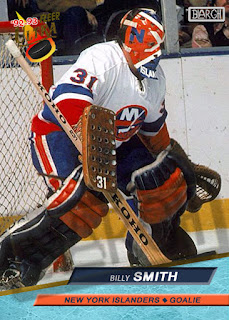 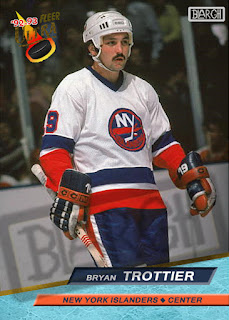 In the summer of 1978, Kings stalwart Rogie Vachon signed as a restricted free agent with the Detroit Red Wings.  The Kings in preparation made an ill-fated trade for a new starter, Ron Grahame, and grabbed a goalie with their second pick in the draft, a 6th rounder, in Doug Keans.
Keans worked his way up through the minors and made his debut on February 16, 1980, a victory versus the New York Islanders.  The Kings had won one of their past 12 games, but Keans help guide the Kings to three straight victories.  In the third game, Keans shared the Kings franchise first shared shutout with Mario Lessard, a 3-0 victory over the Boston Bruins (cue foreshadowing).  Keans left the game after receiving an Al Secord elbow to the back of the head (cue foreshadowing).
Keans split time between the Kings, the minors, and the injury list during his four NHL seasons with the franchise. Unable to dethrone incumbent starter, Mario Lessard, combined with the trade for Markus Mattson, and the emergence of Gary Laskoski, (yes the Kings goaltending was really that bad in the 80s), Keans was placed on waivers.
Keans was picked up by the Boston Bruins and became one of the best back-ups in the NHL of the mid 80s.  In five seasons with the Bruins, Keans played 26-35 games per year and had a .630 win percent.  He backed-up All-Stars Pete Peeters, Pat Riggin, Bill Ranford, and Reggie Lemelin.  A trade deadline deal in 1988 brough Andy Moog to the Boston Bruins, and sent Keans back to the minors.  Keans played the 1988-89 season in the minors before retiring.  In 1992, Keans once again put on the skates, this time for a minor league called the Sunshine Hockey League.  He re-retired in 1995.
Keans never did get a Kings hockey card during his playing days.  Keans had four cards produce of him by OPC, all with the Bruins.  I was always fond of his 1987-88 card.  Even by then, it was rare of OPC to get good action shots of goalies.

Posted by JGBlargh at 4:38 PM No comments:

Jocelyn Lemieux, brother of Claude, was drafted 10th overall by the St. Louis Blues in the 1986 entry draft.  It was the Blues first 1st round selection since 1981.  The Blues traded away their first round picks in 1982 (8th - Rocky Trottier) and 1983 (6th - John MacLean) to the Colorado Rockies for Rob Ramage.  The Blues actually didn't pick a single player in 1983 as they boycotted the draft in protest.  Their 1984 (8th - Shayne Corson) and 1985 (12th - Jose Charbonneau) picks went to the Canadiens in two separate deals, which included a combined total of 14 draft picks trading hands, as well as the Blues acquiring Rick Wamsely and Mark Hunter.  Of interest, the Blues later traded Ramage and Wamsley to the Flames for Brett Hull.  Which basically works out to three first round picks (Trottier, MacLean, and Corson) for Brett Hull.  Yeah, I think I'd take that trade.
As for Jocelyn, although he was unable to translate his draft pedigree to star status, he did play almost 600 career games over 12 seasons. Injuries plagued Jocelyn during his two seasons in St. Louis, a theme that would carry on for his entire career.  The Blues traded Jocelyn to the Montreal Canadiens.  In his first game as a Hab, Jocelyn played on a line with his brother Claude.  The brothers assisted on a goal by Bobby Smith.  Jocelyn, who never took to Pat Burns system, was rewarded with a demotion to the AHL.  He returned to the Habs the next season but was shortly on the move to Chicago.   Jocelyn would spend the bulk of his career as a Black Hawk, which included a trip to the 1992 Stanley Cup finals, before becoming a journeyman the last few seasons of his career, playing with four teams (Whalers, Devils, Flames, Coyotes) in his final three seasons.
Jocelyn would benefit from the 1990 hockey card boon and had four rookie cards that season while he was with the Chicago Black Hawks.  Here's my Lost Rookie card of Jocelyn Lemieux as a St. Louis Blues.

Dan Bouchard was a second-tier goalie of the late 70s and early 80s.  Originally drafted by the Boston Bruins in 1970, Bouchard was left exposed in the 1972 expansion draft and was selected by the Atlanta Flames.  Bouchard spent the 70s splitting net duties with Phil Myre in Atlanta.  Bouchard was with the Flames as the team moved in Calgary in 1980.  He is only player from Atlanta's inaugural roster to make the journey to Calgary.
The emergence of younger goalies, Pat Riggin and Reggie Lemelin made Bouchard expendable and the Flames traded Bouchard to the Quebec Nordiques in January of 1981.  Bouchard was the starter for the Nordiques until the 1984-85 season, when former-Olympian Mario Gosselin pushed the veteran to the bench.  Bouchard was traded to the Winnipeg Jets for a 7th round pick, in the 1985 offseason and played his final NHL in 1985-86.  He went overseas to play in Switzerland but suffered a career ending injury seven games into his European career.
Bouchard's final card was an airbrushed 85-86 OPC with him as a Winnipeg Jet.  Below is what his final OPC card should have been, an 86-87 OPC in his Jets uniform.


I wonder what Bouchard's legacy would have been if the Bruins had kept him.  Prior to the 1972 expansion draft, the Bruins had two Stanley Cup wining goalies on their roster, with Eddie Johnston, and Gerry Cheevers.  Both were on the other side of 30, Johnston was 36 and Cheevers 31.  I'd assume the Bruins felt that they could repeat as Stanley Cup Champs and the veteran Johnston could help them win now as opposed to Bouchard.  One thing the Bruins didn't expect was that the WHA would pillage many NHL teams, signing away their stars with larger contracts, which included Cheevers who left the NHL for greener pa$ture$.  Johnston played another season with the Bruins before being traded to the Blues as the future considerations for an even older goalie, Jacques Plante.  Plante then followed Cheevers example and left to play in the WHA.  Then Gilles Gilbert was the Bruins main goalie for a few season before Cheevers returned.  Bouchard put up superior numbers compared to the Bruins goalies, during the 70s with the exception of wins.  If the Bruins has kept Bouchard, would Bouchard be elevated to a top tier goalie?  Would the Bruins have won another Stanley Cup?

I recently joined a custom cards group on Facebook called Custom Baseball Cards.  The group is actually for all sports but it's been very heavy with the baseball since I joined.  So as my introduction into the group I made a mosh-up of baseball in the OPC hockey style.  Obviously, I had to go with the two Canadian teams.  Since I posted them here, I figure I may as well add it to the blog.
If you know of any active custom card communities, or blogs, especially hockey, drop the links in the comments. 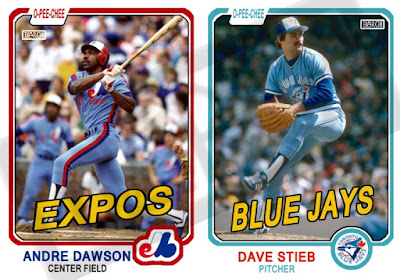 With Gerry Cheevers on the shelf with a knee injury, and Gilles Gilbert down with the flu, the Boston Bruins hosted the St. Louis Blues on January 10, 1980, with two rookie goalies in their line-up, whom had a combined total of zero NHL minutes played.  The Bruins gave the starting nod to local product, Jim Stewart, but he only lasted 20mins.  Brian Sutter scored 1:08 into the game, as the Blues scored 5 goals on Stewart on 9 shots.  He only made four saves, including one shown here.  Stewart was replaced by fellow rookie, Marco Baron, and the Bruins went on to lose 7-4.  A visibly sick Gilles Gilbert returned for the Bruins' next game, two days later.   Neither Baron or Stewart played for the Bruins again that season.  In fact, Stewart never again played in the NHL. The following season, Jim Stewart played for four teams in four different minor leagues, amassing a 4.83 GAA.
Stewart retired from professional hockey in 1982.  He unofficially holds the NHL record for worst career save percentage and has the second worst career Goals Against Average of all-time. Looking back it's a wonder that the Bruins didn't call up veteran Yves Belanger for the game vs the Blues.  One must assume he was injured as well. I also wonder if Jim Stewart was really that bad.  Perhaps he had a serious bout of stage fright.  Regardless of what happened, Jim Stewart, unlike many of us, made it to the NHL.
Like Marco Baron, whom I covered in a previous Lost Rookies, Stewart never had a NHL card.  Below is the Jim Stewart rookie card that could have been.

Posted by JGBlargh at 4:00 PM No comments:

Email ThisBlogThis!Share to TwitterShare to FacebookShare to Pinterest
Labels: 80-81 OPC, Bruins, Custom, Goalie, Lost Cards, Lost Rookies
Newer Posts Older Posts Home
Subscribe to: Posts (Atom)
All pictures are fan art. They are watermark to prevent copying and posting to eBay. I have seen copies on eBay in the past.