I had a great time at the Toronto Sportrscard Expo and I use that for material for future posts.  Another thing I try to do on my holidays is to hit the Dollar Stores and grab some mixed packs.  I usually stay strong and keep my spending restricted to the $1 mixed packs but every now and then I double down and get the $2 Surprise Box. 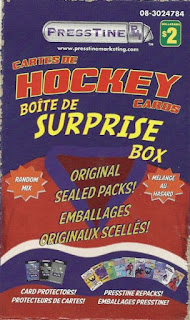 The Surprise Box usually has 3-4 smaller packs of 4-5 cards, and sometimes a sealed pack of cards or supplies.  In this particular pack, it included a mixed pack that claimed  "1 Guaranteed Hall of Famer".  Perhaps you can check out the cards and help me find the Hall of Famer. 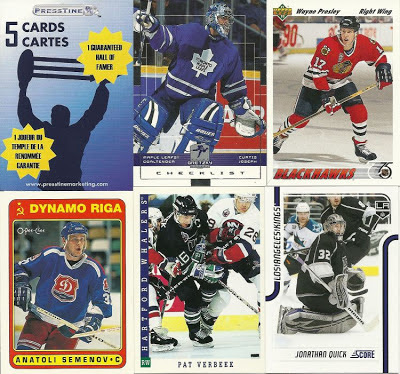 Out of these five players, none are currently in the HHOF.  So who does Prestige consider a guaranteed HHOFer?  First off, we can eliminate Wayne Presley and Anatoli Semenov.  Presley, a one time 30 goal scorer, spent the majority of his career on the checking line and never won any awards.  Semenov didn't come to the NHL until he was 28 and proceeded to play for six teams in seven years.  Jonathan Quick has had a great start to his career, with a Stanley Cup and Conn Smythe, but it is way too early to even think about Quick in the HHOF, let alone issue a guarantee.  Quick still needs several great years to get into the HHOF talk.  Remember how hot J.S. Giguere was at one time?
Pat Verbeek scored 522 goals, good for 34th all-time.  Verbeek retired in 2002 and has yet to be elected to the HHOF.  Verbeek was never a dominant player during his era and accumulated his career totals while playing 1424 games over 20 seasons.
That leaves Curtis Joseph.  Joseph retired in 2009 but was passed over in his first year of eligibility for the HHOF in 2012.  While Joseph has some impressive career numbers, including 454 career wins, he has never been truly great.  Joseph has never won any major individual honours nor has he won a Stanley Cup.  A win the 1996 World Cup could have helped his cause, but instead Joseph, and Team Canada, lost their last two games in huge upset by team USA in the final.  I never thought of Joseph as an elite goalie.  Unless there really is a "Toronto Bias", then I can't see Joseph being called to the Hall.
What do you think?  Was there a guaranteed HHOFer in that pack?
Posted by JGBlargh at 4:44 PM 2 comments: 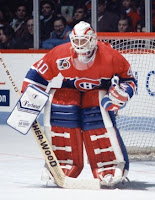 The Toronto Sportscard and Memorabilia Exposition is taking place this weekend.  I plan my holidays around the spring show every year.  The show is a sensory overload for the hockey collector.  There is a lot more than just cards to be seen and bought.  There are loads of memorabilia from jerseys, sticks, pictures, programs, McFarlanes, hockey coins and a lot more collectibles.  The theme for the autograph guests is the the 1993 Stanley Cup Champions Montreal Canadiens.  I rarely buy tickets for the autograph guests.  Patrick Roy will be there but will cost you $180.  Although I might get one or two of the cheaper players.  Do you think Andre Racicot will inscribe "Red Light" if I asked?
Last year, one of the highlights for me was meeting "Hacksaw" Jim Duggan.  He was promoting he new book.  Throughout the day, you could hear a "Hoooooooo!!  reverberate through the expo. I even got onto the Upper Deck Hacksaw Jim Duggan video at the end of day.  You can see me Hoooooo-ing.

I will definitely be at the expo again this year.  I am considering going for two days this year, Saturday and Sunday.  I don't have much of a game plan going in.  I don't usually spend much on a single card.  I tend to buy a lot of cheaper cards.  I think I'll be looking for lesser name rookie autos and numbered cards of star players.  I'll be keeping an eye out for cheaper game used.  Last year a guy had a binder of game used stickered at 50% or less of book, and then everything in the binder was another 50% off.  I got a Patrick Roy game used stick card for $5.  I hope he is there again.  Another great table was the guy who had dozens of 5000ct boxes of base cards and was basically selling them for a dime each, even Taylor Hall and Sidney Crosby.  I am getting excited just typing this.

Are you going to the show?  Do you have a game plan?

Posted by JGBlargh at 8:26 AM No comments:

Email ThisBlogThis!Share to TwitterShare to FacebookShare to Pinterest
Labels: Opinion
Newer Posts Older Posts Home
Subscribe to: Posts (Atom)
All pictures are fan art. They are watermark to prevent copying and posting to eBay. I have seen copies on eBay in the past.