It took 405 days to get this return back, but I am extremely happy with it.  Jean Beliveau is one of hockey's greatest players.  He won 10 Stanley Cups as a player and another 7 as an executive with the Montreal Canadiens.  Beliveau was the first ever winner of the Conn Smythe trophy, back in 1964-65.  At age 39, in his 20th season, Believeau scored 76pts in 70 games, good enough for 9th spot in the league scoring race.  Beliveau finished his career with 507 goals and 1219 points.  He was a first ballot HHOFer in 1972.  I sent this request back in October of 2011.  This is my longest return and first to make the round trip of a calendar year.  Definitely worth the wait.

A new project I am going to be working on is getting the rookie year card of every goalie who played in the 1990s.  To be technical, from the 1989-90 season to the 1999-2000 season.  There are 195 goalies who played at least a single game during those season, but 22 of them never had a NHL card produced of them.  So that leaves 173 cards to collect.


I have decided to put a few rules into place.
1) Player must be in a NHL uniform.  So that mean no World Junior Championship cards or Canada Cup cards.
2) No draft picture cards.  This rules outs Martin Brodeur's true rookie and instead leaves me with one of this 1992-93 cards.
3) Preference given to horizontal pictures.
4) Reprints will be acceptable for the most expensive cards (ie Patrick Roy) which I already own.  This is meant to be a cheap project.  I won't have one card with a greater cost than the other 172 combined.

Below is the complete list of goalies who played in the 1990s and had a card produced.  Included is the year their "rookie" card was produced.  Some of these goalies only had a single card of them made.  I already have a bunch, have some incoming, and I am sure I have more that are still hiding in boxes.  I think this will make for a fairly interesting set once I get them all into a binder.


R.J. Umberger has been an all-star in terms of responding to ttms, and now with Rick Nash out of Columbus, the Blue Jackets hope he can be an All-Star for them.  Umberger has been second on team in goals in three out of the past four seasons.  Umberger is also the franchise's all time leading goal scorer in post season play.  He scored 3 goals in 2008-09, the only time the Blue Jackets have ever made the play-offs.  They were swept in four games, and outscored 17-7 by the Detroit Red Wings.


Ron Ellis played 16 NHL seasons, all with the Toronto Maple Leafs.  Ellis was part of the 1967 Stnaley Cup winning team.  Another career highlight was being a member of Team Canada in the 1972 Summit Series.  Ellis played all eight games and collected three assists.  After the 1974-75 season, Ellis abruptly retired, stating that he no longer had the passion for the game.  The passion would return, as Ellis joined Team Canada in the 1977 World Hockey Championship and then return to play four more seasons as a Toronto Maple Leaf.  Ellis ranks in the top 5 in career goals, 332, and games played, 1034, for the Toronto franchise.

Posted by JGBlargh at 5:42 PM No comments:


Brent Gilchrist  played 792 games during 15 seasons in the NHL.  Gilchrist was drafted by the Montreal Canadiens and was traded away to the Edmonton Oilers just before the 1992-93 season, as part of the deal that brought Vincent Damphousse to Montreal.  While the Habs went on to win the Cup that season, Gilchrist would eventually get to sip from Lord Stanley's Cup in 1998, as a member of the Detroit Red Wings. Injuries would hamper Gilchrist for the rest of his career, playing in only 29 games the following two seasons.  Brent would eventually suffer a career ending back injury while playing for the Nashville Predators, in a game against one of his former teams, the Edmonton Oilers.
I once read in a TTM forum, a collector complaining about Gilchrist's auto.  How that is it just a big B and G.  I think he has a cool signature.  Some players you can't make out a single letter of their auto.  His auto has some panache to it, while still being legible.

Did You Know...
Brent Gilchrist is the NHL's all-time career leader in games played,
goals, assists and points for player who wore #41.
Posted by JGBlargh at 3:36 AM No comments:


Rich Pilon was a key member of the 1993 New York Islanders play-off run.  He's best remembered for the Kevin Stevens incident in the first period of game 7 of the Patrick Division final.  Stevens has knocked unconscious while attempting to lay a big hit on Pilon.  Stevens' face hit against Pilon's visor, and he was unconscious before he slammed to the ice, face first.  Stevens would need extensive facial surgery.  The Islanders would go on to win the game in overtime, ending the Penguins' chance at a third straight cup.  Before getting all Don Cherry on Pilon, please know that Pilon's career was almost ended in 1989, after getting hit in the eye with a puck, that shattered his orbital bone.  Pilon's entire career was mired by injuries and eventually ended with a wrist injury eight games into the 2001-02 season.  Pilon now lives in Saskatchewan.  He teaches youth the benefits of hockey and the dangers of substance abuse.

Posted by JGBlargh at 5:03 PM No comments:


It took Garth Butcher 6 seasons and 383 NHL games before OPC would give Garth a rookie card in the 1988-89 set. All it took was Garth leading the Canucks in PIM for four straight seasons.  Although it could have been worse, Butcher made Pro Set before he ever made it into Topps.  Here's what his rookie might have looked like.

There is a lot of hole in Garth's career, in terms of card. He only got a single card over the course of eight seasons.  So in addition to the 82-83 card above, let's fill in some of those oversights.  One issue with Garth is the change in Canucks uniform in 1985.  There are few usable picture of Garth in a flying V uniform.  I even stretched the it a bit using the picture with the JCM patch for the 83-84 card, as it wasn't until the 1984-85 season that the Canucks wore that patch.  So sorry Butcher fans, you are not getting as many cards as you should.

I was always a bit concerned that my 88-89 OPC Tribute would be copied and reproduced.  I thought people might print them off for themselves.  In the end, I decided "whatever".  As long as they aren't passing them off as their own or trying to sell them.  When I think about it, all I am doing is reproducing someone else work anyways and then adding in someone else's picture I found on the internet.  Although I do put a lot of work into the templates.  I don't scan a card, erase the picture and then put in a new one.  Every template started as a blank file.  I guess you can call them original duplicates, but I do consider the templates my own.
Today I was on eBay looking to see if a certain player had any cards listed.  The cards he had listed was a custom card.  I have seen this seller before and I decided to see what else he had.  What I saw looked too familiar.  He had several 88-89 OPC cards.  The pictures on them were not the ones I used but the card design just looked way too familiar.  Upon further checking, I am pretty sure he copied my file. 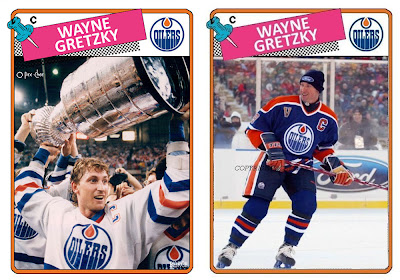 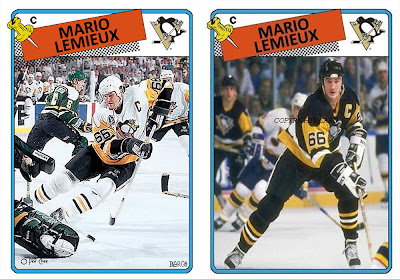 Compare the two sets of cards above.  My version is on the left and his is on the right.  Notice how similar the borders, fonts and positioning of the logo are.  When I did the tribute set, the hardest part was the Pin and the shadow.  Let's put my picture on top of his and set mine to 50% opacity and compare. 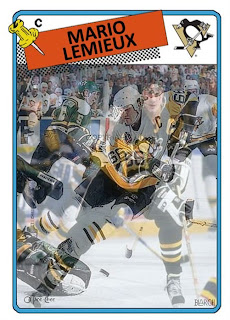 Upon comparison, every lines up exactly with the exception of the pin marks that cover the player picture.  My picture has the shadow on top of the player picture, but his doesn't.  The first reason that jumps to mind is because when he removed the picture from my version, he also had to remove the shadow.  Compare side by side and the with mine over top at 50% opacity. 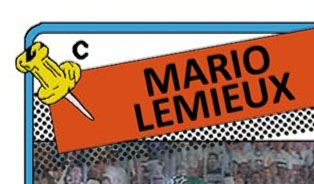 The shadow lines up perfectly.  Even where the shadow dots met the upper border of the picture.  To do the shadow I used the pencil tool, did a bunch of dots and then used the copy and paste.  I had to adjust the size of the shadow dots as I got to the bottom of the shadow as well.   Even the marks on the Pin are exactly the same.  I had a hell of a time with the pin originally since using the paint dump tool would results in more and more of the black marks inside the pin to be colored over.  The pin marks were made with the pencil tool set at 1 pixel.
Also, of interest is the use of trademark on the team logo.  On some team logos, I erased the trademark and on others I left it.  The original 88-89 set had trademarks on all the logos.  For both mine and his cards, there is a trademark for the Penguins and Canadiens.  For the Oilers card, there is not a trademark for either.
Here the link for the one of his auctions. His user ID is norm202020.

Email ThisBlogThis!Share to TwitterShare to FacebookShare to Pinterest
Labels: 88-89 OPC, Custom, ebay, Opinion
Newer Posts Older Posts Home
Subscribe to: Posts (Atom)
All pictures are fan art. They are watermark to prevent copying and posting to eBay. I have seen copies on eBay in the past.