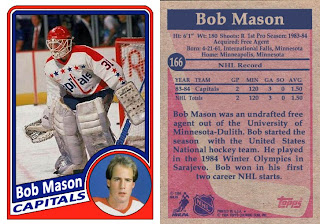 Mason played several years in the NHL without a card, so I thought I would revisit this post and make a few more cards for Mason - to fill in the blanks.  First thing I needed to do was update the 84-85 OPC with a more appropriate picture.  It's fairly obvious based on the gear and helmet, that this was a more timely picture for his 84-85 card.  For three seasons, starting in 83-84, Mason bounced between the NHL and AHL, spending most of his time in the AHL.  The 1986-87 season was his first full season in the NHL.  He bounced around the league for his final five seasons, with a different team each year.  He only played a handful of games with the Vancouver Canucks in 1990-91, but I wasn't able to find a decent picture to use for a card.  So I am still on the lookout for that.

__________________
Update October 9, 2021
I finally stumbled across a picture of Bob Mason as a Vancouver Canuck that is usable for a card... although just barely.  There was some debate over who this was.  In the end it was easy to tell as Bob Mason catches with his right hand, which is a rarity for Vancouver Canucks goalies who wore #31 during the era that the Canucks wore those jerseys.  So now the Bob Mason, the original Lost card on this blog, collection is complete.