Doug Jarvis holds the record for the NHL's longest consecutive game streak.  He never missed a regular season game in his career.  He played in every game from October 9, 1975 to October 10th, 1987.  Jarvis, then with the Hartford Whalers, was scratched in the 3rd game of the season.  He never played again in the NHL.  He was demoted to the AHL later in the year and retired after 24 games.  Jarvis filled his trophy case during his playing days, winning four Stanley Cups, a Franke Selke trophy, a Masterson trophy and a Bronze medal in the inaugural, but unofficial, 1974 World Junior Hockey Championship.  Jarvis won two more Stanley Cups as an assistant coach,  Dallas in 1999, and Boston in 2011.

Posted by JGBlargh at 1:31 PM No comments: 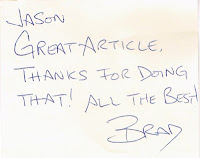 Back in July, I did a post on Brad Fast and it included a Question and Answer with Mr. Fast.  To Summarize, Brad Fast is one of three NHL players who have scored one career goal in one career game.  His goal was also the last ever game-tying goal in the history of the NHL.  Last month, I finally got the cards and stamps together to send him a TTM request.  Perhaps even better than the autographs, which look mighty sharp, is the note he included.  It's strange.  I believe he did me the big favour by answering the questions.  His note almost makes it seem like I did him the favour by asking the questions.  It's great with a win-win occurs.  I am really happy that Mr. Fast enjoyed it.  I love doing TTM since it brings me closer to the game and players.  Thank you, Mr. Fast.

Adam Henrique had a memorable rookie season.  He was a Calder trophy finalist, scored 2 series winning game 7 overtime goals in the play-offs, and made the Stanley Cup finals.  He also got a Gordie Howe Hat Trick on January 10th vs the Flames.  His opponent in the fight, Jarome Iginla, also got a Gordie Howe Hat Trick in that same game.  Due to the lock-out, Henrique has started the season with the Albany River Rats of the AHL.  In Junior, Henrique was part of the Windsor Spitfires, who won back-to-back Memorial Cups in 2009 and 2010.  I sent the request care of this parent's home.  He kept a copy of the picture, as offered.

Posted by JGBlargh at 4:54 PM No comments:

I have been working on a TTM set honouring the players who got a Gordie Howe Hat Trick in 2011-12.  I have a few successes so far, and already a RTS, but also had a lot that have been out since April or May. I have a feeling a few of these will never get signed TTM.  Here's a look at all of them.  I tried to use a picture from the game the GHT happened in.  Wasn't able to do it for all players.  There either wasn't a good picture, or the picture made it look like they got destroyed in their fight, which a few actually did.  Some NHL teams celebrate the GHT, but some don't knowledge its existence.  Anyone want to predict how many of these will get signed through TTM?  Current autos on them are fake of course. 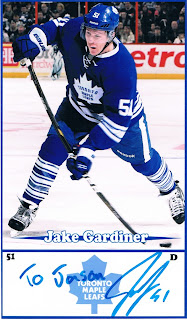 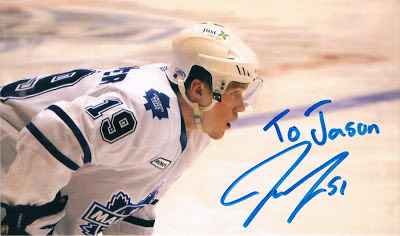 Posted by JGBlargh at 4:42 PM No comments:

Ben Scrivens was to challenge for the back-up goalie spot on the Maple Leafs roster this season.  Instead he gets to be the starting goalie of the Toronto Marlies, the Maple Leafs AHL affiliate.  Scrivens had a great year with the Marlies last season, helping the team get to the Calder Cup finals.  I was on holidays in Toronto and got to see a play-off game live.  For under $50 a ticket, we got to sit 3 rows off the glass for a play-off game and I was able to take some great pictures.  That's what makes this return extra special.  The pictures Scrivens signed were ones I took.  The Marlies won that game, 3-0, and Scrivens was the first star.  Another cool think is that I have a ITG Between the Pipes auto card of Scrivens and his paid auto looks just the same as his ttm auto.  His auto is really just a big BS30 but he does it with flare.  He even dots the i in last name too.  One of my favourite returns to date.

Posted by JGBlargh at 1:20 AM No comments:

Nikolai Borschevsky was a 28 year old rookie when he debuted with the Toronto Maple Leafs in 1992.  Borschevsky was one of the many Russians who took advantage of the dissolution of the USSR to cross the pond and take their shot at the NHL.  While Borschevsky's career only lasted 162 games, he will forever have a place in Maple Leaf history.  In his rookie season, Borschevsky finished 4th in rookie scoring with 74 points.  He led the Maple Leafs in goals, 34, and +/-, 33.  The moment a generation of Leafs fans will never forget, is Borschevsky's game 7 overtime winner against the Detroit Red Wings in the Norris division semi-final. His game 7 tip-in paved the way for the Leafs to make their deepest play-off run since the 1977.  After a very promising rookie season, Borschevsky, who was only 5'9' and 180lbs, began to run into a serious of injuries, including a ruptured spleen.  The injuries, NHL lockout, and trades marred his final seasons in the NHL.  He scored 1 goal in his last 39 games while playing for three different teams in his final two NHL seasons.  Borschevsky returned to Russia to play two more seasons before retiring.

Posted by JGBlargh at 4:54 PM No comments:

Now that everyone has had a chance to crack a few  packs of the 88-89 OPC Tribute set, I'll post the In Action insert set.

Posted by JGBlargh at 2:53 PM No comments:

Mario Gosselin played in 241 NHL games and is best remembered for playing goal for the Nordiques in the mid 1980s.  Gosselin helped the Nordiques get to the Wales Conference finals in 1985 after beating Quebec's hated rivals, the Montreal Canadiens, in game seven overtime of the Adams division finals.  Wales Conference?  Adams Division?  Quebec Nordiques?  A 3.34 GAA being good enough for top ten?  Tied for 9th in the league leaders with one shutout?  Yes, the glory years of hockey.  When teams actually loathed each other and tried to win by outscoring their opponent, not out defending.  Gosselin finished up his career with stops in Los Angeles and Hartford.  He retired after suffering a career-ending knee injury in 1993.  Gosselin seemed to have bad luck with the OPC photogrpahers in the 80s.  Every single card from 85-86 to 89-90 shows Gosselin in the dreaded goalie without a helmet/mask shot.  Finally Upper Deck gave Gosselin some hockey card love by snapping the sweet shot above to include in the 1990-91 set.  Gosselin currently runs a goalie school in St-Basile Le Grand, Quebec.  The Game Seven Foes auto below is my first dual TTM and custom.

Bill Mikkelson played 141 career NHL games and was a player I had never heard of until reading a where are they now article in Sports Illustrated.  Mikkelson was part of the 1974-75 expansion team, the Washington Capitals.The 1974-75 Caps set NHL records for worst winning percentage, .131, and goals against in a season, 446.  They set a modern day NHL record with fewest points in a season with 21.  While some of those team records will likely never be broken, Bill Mikkelson set a record that's considered unbreakable.  While playing in 59 games, Mikkelson was a -82. To put that in perspective, only a single player has a lower +/- when combining all seasons since the lockout.  Jack Johnson is -85 in 364 games.  Since 1994-95, the first lock-out season, only four players have gone below -40, with Rico Fata topping (or is it bottoming?) that list with a -46.
Mikkelson is not alone on the list of worst single season +/-,  spots 2, 3, and 4 all belong to teammates from the 74-75 Caps.  Greg Joly was a -68 in 44 games, and Jack Lynch, a last season acquisition, was -54 in 20 games with the Capitals.  If Lynch had played all 80 games with Caps, that projects to a -216 for the season!!!  As mentioned in the SI article, Bill Mikkelson's single season worst +/- might just be a truly unbreakable record.  Mikkelson's attitude remains positive about the experience.  It is better to have played and been scored upon (lots) than to have never played at all.  "I got to play. And the price I paid, I would pay it 100 times over." He has also fathered a NHL defenceman, Brendan, and a Olympic Gold medal winning defencewoman, Meaghen.


Jordan Sigalet played a total of  3 minutes in the NHL.  His career was dealt a serious blow even before he turned pro, when he was diagnosed with Multiple Sclerosis.  Jordan battled the disease through out his career.  While Jordan was never able to reach his full potential as a hockey player due to the disease, he has made a greater difference in the world by being a role model and inspiration for others with multiple sclerosis.
I had already featured Jordan Sigalet in a previous post.  Check it out to read more about Jordan Sigalet.

Posted by JGBlargh at 9:00 AM No comments:

Email ThisBlogThis!Share to TwitterShare to FacebookShare to Pinterest
Labels: AHL, Bruins, Custom, Goalie, TTM
Newer Posts Older Posts Home
Subscribe to: Posts (Atom)
All pictures are fan art. They are watermark to prevent copying and posting to eBay. I have seen copies on eBay in the past.