3 card return from Basil McRae, all signed with ballpoint pen.  It's hard to be disappointed with any auto you get TTM but they are a lot nicer when signed with a sharpie.  I have read of some TTMers sending a sharpie along with their items, LOR and SASE.  Basil McRae currently runs a Financial Services Firm in London, Ontario.

Posted by JGBlargh at 2:50 AM No comments:

In 1956, Eric Nesterenko attended classes at the University of Toronto during the week, then on the weekend, he played for the Chicago Black Hawks.  Could you imagine that ever happening in today's NHL?  I sent him a parkhurst card and a 4x6.  I also sent an extra copy of the4x6 for him to keep.  Mr. Nesterenko returned the card and both 4x6s signed.  Thank you Mr. Nesterenko. 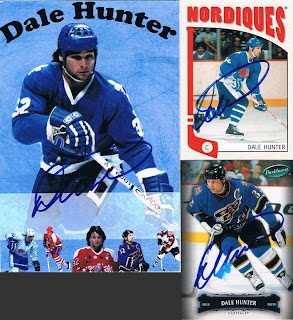 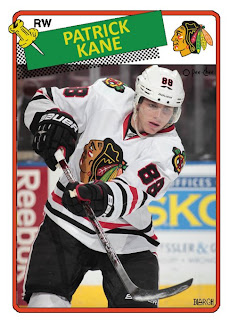 Here comes a long overdue update for the 88-89 OPC Tribute Set.  Patrick Kane has made a name for himself, on and off the ice.  The 1st overall pick from the 2007 NHL draft has made a Sylvain Turgeon card worth more than a dime, won a Calder Trophy, partied hardy, punched a cabbie, harnessed the power of the mullet, and scored the 2010 Stanley Cup winning goal.  If he could learn to use a mouthguard he could be unstoppable. 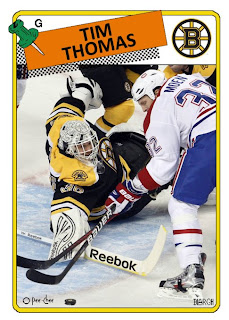 Tim Thomas has been finding almost everything stoppable of late.  Thomas is a two time Vezina trophy winner and last year's Conn Smyhte winner from the Stanley Cup Champions, Boston Bruins.  Tim Thomas got a late start in the NHL, only playing NHL 4 games before age 31.  Tim Thomas was originally a 9th round draft pick, 217th overall,  by the Quebec Nordiques in 1994.  He later spent time in the Edmonton Oilers farm system before signing with the Boston Bruins in 2002.  Thomas is  great inspiration for player still toiling in the minors in the mid-20's. 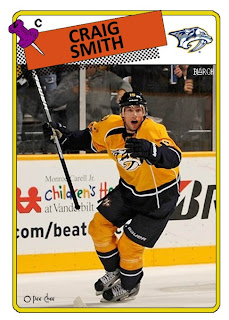 Craig Smith has been an early surprise contender for the rookie scoring race.  A 4th round pick from 2009,  Smith is currently second in rookie points behind Ryan Nugent-Hopkins.  If Smith keeps his scoring pace up, he could be a finalist for the Calder Trophy.  If not, Smith might best be remembered for his empty net miss.  He had better luck attacking empty nets while playing with Wisconsin.  Ain't Karma a bitch?

Posted by JGBlargh at 7:10 PM No comments:


I haven't updated a lot of late.  I had to juggle shifts last week, and this upcoming week, so I could escape to Edmonton for the weekend.  You know you are in tough when Edmonton in late November is considered an escape.  I picked up some cards I want to blog about and found a few TTMs in my mailbox when I returned home today.  So if I can find the time and the gumption, I should have several posts this week.
Posted by JGBlargh at 1:48 AM 1 comment:

Is an 84-85 OPC Tribute set on the horizon?  I doubt it, doing the 88-89 Tribute is grueling enough.  But now that I made the template, it'd be a crime not to make a few more.  Although I will have to fix the Player's Face circle.  It's too close the the edge.

Posted by JGBlargh at 3:25 AM No comments:

The captain of the Minnesota Wild, Mikko Koivu, is also the little brother of Saku Koivu.  Mikko havs carved out a nice career himself, including a 71 point season in 2009-10.  Jose Theodore has gone from the Montreal Canadiens next great hope down to being a placeholder for the Florida Panthers.  Theodore has never been able to duplicate his success of 2001-02 when he won the Vezina and Hart Trophies.  He has had a strong start in 2011-12 for the surprising Florida Panthers.


Mario Lemieux's name is often brought up when debating who was the best player ever.  Lemieux played 17 season but played 70 games or more only six times.  How good could Lemieux have been if his career hadn't been plagued by back injuries, or not had cancer in his prime of his career, or missed a season due to radiation treatments, or be retired for 3 years before making yet another comeback or had a better supporting cast earlier in his career.  Mario Lemieux retired in 1997 and was inducted into the Hockey Hall of Fame in Novemeber of that year.  Three years later Lemieux returned to the ice and lead all players in goals per game, assists per game and Points per game.
The picture I chose for the card isn't the sharpest image, but for me, it's an iconic image.  It's of his epic goal on Jon Casey in the 1991 Stanley Cup Finals.

Posted by JGBlargh at 6:03 PM No comments:

Jordan Eberle is part of a young Edmonton Oilers nucleus.  A first round pick in 2008, Eberle scored a highlight reel goal in his first NHL game.  Eberle finished his rookie season with 43 points in 69 games.
The New York Islanders have a logjam in the crease this year and in usual Islanders fashion, they are screwing things up again.  They are stuck with porcelain doll's, Rick Dipietro, albatross of a contact so they feel the need to play him.  Then they have 36 year old Evgeni Nabokov, who has a no trade clause.  Lastly,  they have Al Montoya, who has been the best goalies for the Islanders since he joined them late last season. Yet the Islanders are determined to play them equally.  Hopefully the Islanders will do the right thing.  That would be get Nabokov to waive his no trade clause then ship him out and then put Dipietro on the bench.  But these are the Islanders and the ghost of Milbury is still meddling.


Ron Francis played in the NHL for 23 seasons.  His 1788 career points are good for 4th all-time and his 1249 assists place him 2nd all-time.  While Francis is a long way off from reaching the top in career points or assists, the 2004-05 lock-out cost him a chance at being the career leader in games played.  Francis played 1731 games, just 36 short of Gordie Howe's 1767.

Excellent return from Dale Hawerchuk.  I sent Mr. Hawerchuk 2 cards and a picture to sign.  I sent an extra copy of the picture for him to keep if he wished, but instead he signed it and returned it.  So I ended up 2 cards and 2 pics signs.
I sent the letter care of The Barrie Colts on October 11th.  I received the cards on November 4th.
Posted by JGBlargh at 3:41 AM No comments:

Great return from Dean Sylvester.  I was organizing some of my cards when I came across the Victory card on the end.  I remember having him on a fantasy hockey team and I wondered what ever happened to him.  So I figured I should see if I can get the card signed.  After going through a few pages of google search results I found what appeared to be a good address.  I wrote a letter and I got the cards in the mail today.  This is my best return so far and what makes it the best is that he added two cards and he also responded to my letter with one of his own.  He answered a question I had, (a back injury forced his early retirement), and commented on some of what I wrote.
I am far more excited about this return than any of the others I have gotten back so far.  So excited I am going to try to get his SPA rookie.
Did you know Dean Sylvester scored the 1st ever hat trick in Atlanta Thrasher history?

Posted by JGBlargh at 5:10 PM No comments:


Teemu Selanne broke into the NHL with a bang.  He destroyed rookie records for goals, 76, and points, 132.  While Selanne has never approached those single season totals again, he did lead the league in goals two more times and won a Stanley Cup in 2007 with the Anahiem Ducks.  Selanne is only 45 points from passing Jari Kurri as the top career point scoring player from Finland.  Selanne is currently 13th in career goals, 642, and 24th in career points, 1354.

Ondrej Pavelec enters the season as the starting goalie for the Winnipeg Jets and hopes to build on his performance from last season.  In 2010-11, Pavelec may be best remembered for his on-ice collapse during a stoppage in play in October.  He received a concussion from his collapse and missed almost the first month of the season.  He finished the season with a 2.73 GAA and a .914 Save Pct.


It sometimes feels as if Cody Hodgson has been around forever.  The 10th overall pick of the 2008 NHL Entry Draft, and CHL player of the year in 2009, finally made his debut last season.  He had 2 points in 8 games and also played 12 games during Vancouver's postseason run at the Cup.  This came a year after Hodgson lost almost the the entire 2009 season due to injuries.  In 12 games so far in 2011-12, he has 5 points.  Vancouver fans hopes he is well worth the wait.

Posted by JGBlargh at 6:05 PM No comments:

Email ThisBlogThis!Share to TwitterShare to FacebookShare to Pinterest
Labels: 88-89 OPC, Canucks, Ducks, Goalie, Jets
Newer Posts Older Posts Home
Subscribe to: Posts (Atom)
All pictures are fan art. They are watermark to prevent copying and posting to eBay. I have seen copies on eBay in the past.