Zarley Zalapski was drafted 4th overall in the 1986 NHl entry draft.  What is particular interesting is that he never played college or major junior hockey.  He was drafted from the Canada National team.  Prior to 1988, professionals were not allowed to compete at the Olympics.  The lure of the 1988 Olympics on home soil was enough for a few top prospects to join Team Canada.  There was also coach Dave King who was beginning to make a name for himself.  Three players from the Canadian National team were drafted in the 1st round in 1986.
While 1988, was the first year professionals were allowed to participate in the Olympics, the NHL did not schedule a break in thier schedule, so few NHLers were able to join.  The roster for the Olympics was a mixture of amateurs, prospects, ex-NHLers, NHL hold-outs and a few players who were granted leave by thier teams.  Hopes were high for Team Canada, who had performed well in tournaments prior to the Olympics.  Unfortunatley, the last-minute influx of a few NHL players, did not boolster the team as expected.  Team Canada finished in 4th place.

After the Olympics came to an end, several of the amateur players, including Zalapski, made the jump to the NHL.  Zalapski had an assist in each of his first two NHL games and had a 4 point night, including his first career goal against Ron Hextall and the Philadelphia Flyers.  Zarley finished the season with 11 points in 15 games.  In 1988-89, Zarley scored 45 points in 58 games and was selected to the All-Rookie team.  It was enough to get Zarley his first OPC card in the 89-90 set.  I wasn't very impressed by it so I created a 88-89 OPC rookie for Zarley. 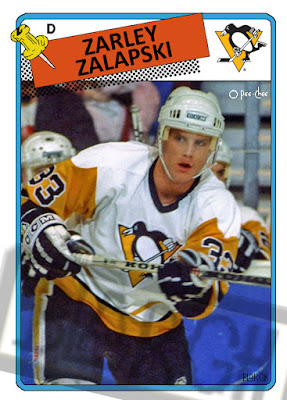 After another injury shortened season in 89-90, Zalapski was finally healthy, but the addition of Larry Murphy to a blueline that already included Paul Coffey, made Zalapski expendable.  The Penguins had an excess of offence but a lack of grit on the backend.  Zalapski was part of the blockbuster deal at the trade deadline with the Hartford Whalers, than sent Ron Francis and Ulf Samuelsson to the Penguins and helped propel the Pens to two back-to-back Stanley Cup Championship.  Zalapski would have his best offensive season while with the Whalers, scoring 20 goals in 92-91 and 65 points in 92-93.  Zalapski was traded to the Calgary Flames at the 1994 trade deadline.  Zarley would slide down the depth charts with the Flames, before a knee injury caused him to miss almost the entire 1996-97 season.  Zalapski continued to struggle during the 97-98 season and was traded to the Montreal Canadiens to finish the year.  Zarley signed as a free agent with the New York Rangers in 1998 off-season, but failed to make the team out of training camp.  Although Upper Deck thought it would get a head start and included Zarley as Ranger in their 1998-99 set.
Zarley went overseas in 1999 but returned to North America to play in the IHL.  During the season, the injury bug bite the Philadelphia Flyer's blueline and Zalapski was signed to fill in the gaps.  Zalapski began his Flyers career like he did his NHl career, notching assists in his first two games.  After that, Zalapski failed to score a point in ten more games.  As players returned from injury, Zalapksi's ice time disappeared.  While Zalapski would not play in the NHL again, he would continue to play pro hockey, either in North America or Europe, until 2008.
In 2017, Zalapksi passed away due to a heart disease.
Zarley's brief stint with the Philadelphia Flyers did not warrant a cart from any of the major card companies, so I decided to create one.  It was an easy choice as to which design to use.  The 2000-01 UD Vintage set was my favourite design from that season.  This was before retro or vintage sets were popular. 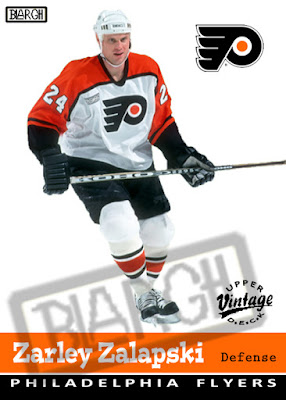 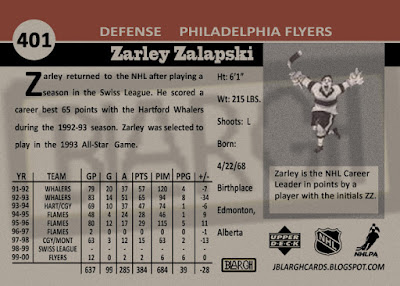