Another eBay rip-off from my blog; Same Seller

I first found this seller back in November of 2012.  He was taking the pictures of the 88-89 OPC Tribute set I was posting to my blog and then selling them as his own on eBay.  Some of the listings were the exact same picture he lifted off my blog but most were ones were he replaced the pictures but kept the framework.  Some of his work was quite sloppy.  The shadow of the name box was often cropped very poorly.
I contacted him, he denied it.  I sent him a link to my blog with proof, he never replied.
So I started putting a Blargh copymark across the pictures I posted of new custom cards.  It seemed to work, until I did a search on eBay and found this from the same seller as before. 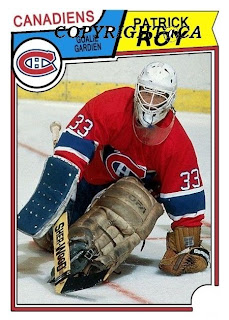 Which looks like it may be an exact copy of this picture from a post in October of 2012.. Okay, before I call this eBay seller a piece of shit, let's try to verify it.  When I did my 1980s OPC, I did the entire template.  I didn't scan a Canadiens card from the set, cut out the picture and put in a new one.  I do all the lines and shapes to make the boxes to be as close to the original card as possible.  So odds of his lines being the exact same as mine are highly unlikely.  Ditto for the font and text.  The picture below is his card layered on top of mine (without the Blargh mark), with his set at 50% opacity. 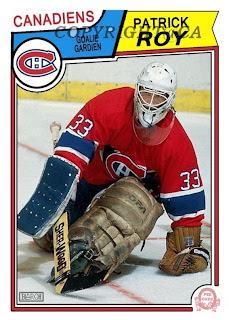 Gee, what a surprise, it's identical.  What are the odds of that?  But how did he get a copy without the big Blargh across the top?  Even if he photoshopped it, the lines wouldn't match exactly the same.  And why remove the OPC symbol on the bottom?  I did originally post the picture without the Blargh mark on it but added it a few weeks later after finding the eBay copies of my pictures.  If he saved a copy back in October of 2012, then why wait until now to post it on eBay?
I did some checking and I found out that Blogger stores all your pictures you uploaded in a Picasso album.  I am not sure if someone can access it, but the original 83-84 Roy, without the big Blargh, was still online in the Picasso album.  I have gone through and deleted anything I don't want copied.  While imitation is the sincerest form of flattery, if any one makes money off me ripping off OPC, then it should be me