One Star, One Sheet; Bill Guerin

Bill Guerin was an upper tier power forward in the 1990s and early 2000s.   He twice topped the 40 goal mark and played with eight teams over his 18 year career.
Originally drafted 5th overall by the New Jersey Devils in the 1989 draft, Guerin chose to go to college.  He played two seasons at Boston College before making the jump to pro hockey in 1991.  After being a point a game player with the Utica Devils in the AHL, Guerin earned a permanent spot on the Devils roster during the 1992-93 season.  Guerin was a physical force for the Devils and helped the Devils win a Stanley Cup in 1995.  In a game against the San Jose Sharks on Novemeber 11th, 1995, Guerin earned his first career Gordie Howe Hat Trick, scoring a goal, an assist and also getting into two fights.
Guerin was selected to team USA for the 1996 World Cup of Hockey.  While Guerin was unable to score a goal, he provided toughness for the team and won a stunning upset over the heavily favoured Team Canada.  Guerin followed it up leading the Devils in goals, with 29.
Prior to the 1997-98, Guerin sat out training camp, hoping to get a better contract.  Of course it made huge waves with Devils fans, but it also made national sports headlines as the Devils GM, Lou Lamarillo, who was also the GM of the USA Olympic team, left Guerin off the preliminary roster for the Olympics.  The situation drew the ire of the NHLPA and other USA hockey stars, but in the end it was Guerin who blinked first.  Guerin, begrudgingly, signed a 3 year, $5 millions dollar deal, not so much to play for the Devils, but to play for team USA in the 1998 Olympics.
By January of 1998, the saga drew to a head, as the New Jersey Devils shipped Bill Guerin to the Edmonton Oilers in a four player deal.  Guerin got to play for team USA in the the 1998 Nagano Olympics.  Team USA had a regrettable performance on the ice, finishing 6th, and off the ice, trashing their hotel rooms.  Before the off-ice incident Guerin was asked if the team should have a curfew, his reply was prominently featured in the papers after the room trashing.  "No.  Why should we?  We are all grown men.  We know how to handle ourselves."


Guerin spent three seasons with the Oilers.  He had his first 30 goal season and had 64 points in 1998-99 but he followed that up with a disappointing 24 goal and 46 points in the following season.
Guerin, a restricted free agent after the 2000-01 season and eligible to be an unrestricted free agent in 2002, played himself out Edmonton, by that I mean out of Edmonton's price range.  In the 2000-01 season, Guerin was fourth in the league in scoring with 22 points after 21 games when he was traded to the Boston Bruins in a deal for Anson Carter and draft picks, one of which was used to select Ales Hemsky.  Guerin would continue his point a game pace and finished with 40 goals and a career high of 85 points.
Guerin would sign a one year deal with the Bruins and set a career high with 41 goals, which was 2nd best in the NHL that season.  He was chosen as a Second Team All-Star.  He won a silver medal at the Olympics in Salt Lake City.  Guerin was seen as one of the biggest names available during the 2002 free agency period and he was set to cash in, and he certainly did.
The Dallas Stars signed Guerin to a 5 year, $45 million dollar contract.  Straddled with high expectaions, Guerin struggled to produce.  Scoring 25 and 34 goals in the first two seasons of the contract.  After the 2004-05 lockout, with rules in place to increase scoring, Guerin looked lost, scoring only 13 goals, a career low, excluding the 1995 lock-out season where he scored 12 goals.  He was still selected to his third Olympics but Team USA put in a horrible performance, finishing 8th The Stars cut Guerin loose, buying him out of the remaining two years on his contract.
Guerin signed a one year deal with the St. Louis Blues for $2 million.  Guerin was rejuvenated in St. Louis, scoring 28 goals in  61 games.  The Blues, who were out of the play-off chase come the trade deadline, sent Guerin to the San Jose Sharks for a pair of prospects and a 1st round draft pick.
Guerin had 8 goals in 16 games with the Sharks, but Sharks failed to make it out of the second round in the play-offs.  Guerin, an unrestricted free agent, signed a 2 year, $9 million contract with the New York Islanders.  Guerin led the Islanders with 23 goals in 2007-08.  The Islanders were an abysmal team, finished 26th in the NHL in 07-08 and were on thier way to a 30th place finish when they dealt Guerin to Pittsburgh Penguins.
The Penguins, who had lost in the Stanley Cup finals the previous season, were looking for Guerin to add veteran leadership to a young team.  Guerin played incredibly well in the play-offs, scoring 15 points in 24 games and helped the Penguins win the Stanley Cup.  It was Guerin's second career Stanley Cup.  Guerin would play one more season with the Penguins.  Guerin scored 21 goals, his 13th 20+ goal season.
Guerin was invited the Philadelphia Flyers training camp in 2011, but failed to make the team.  With no other offers for in his services, Guerin officially retired in December of 2011. 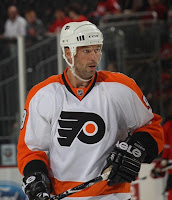 Guerin was elected to the US Hockey Hall of Fame in 2013.  He currently works in Player Development with the Pittsburgh Penguins.