This is the second time I received a TTM from Dan Daoust.  The first was back in 2013.  I sent to him again since I now had some custom cards for him to sign, which were featured in a previous Lost Cards.  He signed both, kept the copies I offered him and returned a note saying "Nicely done with the cards".  It's always a warm fuzzy feeling when a player keeps the customs offered and the cherry on top is when they include a short note.
What is interesting is that he only played 4 games with the Canadiens but remembered his number with them. 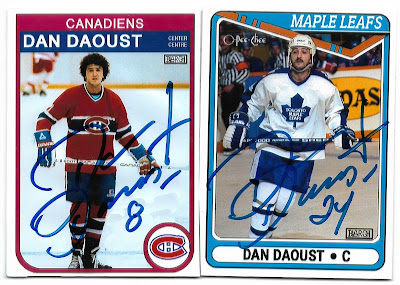