When it comes to TTMs, Scott Clemmensen is consistent.  He's a solid signer and always uses the same faded marker.  All the returns I have seen from him in the past year, all are done with a fading marker.  I do find it odd that he cares enough to return the TTMs but keeps using a barely legible marker.  Unless this is his way to ensure that his fans get an auto and they don't end up on eBay.  Clemmensen signed 3 of 3 and also signed and returned the extra copy of the picture. 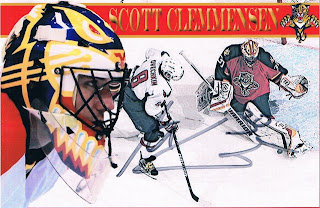 Clemmensen, drafted in 1997, started his career with the New Jersey Devils but was stuck behind future HHOF Martin Brodeur.  After a year with the Toronto Maple Leafs, Clemmenen returned to the New Jersey Devils in 2008. An injury to Brodeur finally gave Clemmensen the chance to play.  His 40 games that season were more than his previous five years combined and he produced results, as he was in the top 10 in save percentage and GAA. 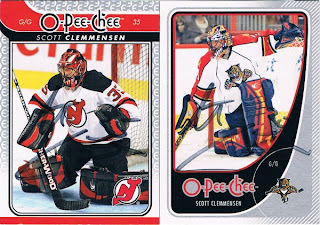 The following season he signed as a free agent with the Florida Panthers.  Does Clemmensen hold a grudge against the New Jersey Devils?  He is a 4-0 career vs the Devils.  Each time besting Broedur.  Clemmensen will be a unrestricted free agent this off-season.  With Jose Theodore signed for another year and rookie Jakob Markstrom on the rise, Clemmensen will likely be on the move again.
Posted by JGBlargh at 12:55 PM