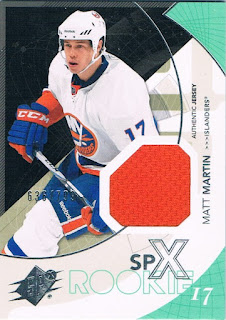 One of the reasons, the record was without fanfare, is because the NHL only officially started recording Hits as a stat in 2005-06.  Another reason is that what is and isn't considered a hit, is all subjective to the home arena official scorer.  So it it possible to quantify a home arena advantage?  My answer to that is yes, it can be, but not by me.  Instead I throw up some stats and figures that likely don't mean anything, like the chart below. 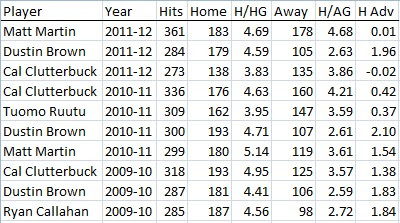 The chart shows the top hit leaders of the past few years, actually the only years I found home/away splits for hits.  So what does this chart tell us?  Matt Martin averages 0.01 more hits per game while playing at home compared to the road, which reduces the possibility that an home-ice scorer advantage has pushed him to the hits record.  If say, Dustin Brown had broken the hits record, then home scorer advantage could definitely come into play. Unless Dustin Brown is just more of a hitter at home than away.  Perhaps we should look at each team?

Or maybe just the teams of the top three hitters.  The Kings are actually 2nd in the league in total hits and 10th in terms of percentage of total hits at home.  The Islanders rank 16th and 12th, while the Wild rank 20th and 28th.  So I don't think we can say that the Islanders as a team get a home scorer advantage.  I am willing to say Dustin Brown is hits more at home than on the road and doesn't benefit, or should I say, greatly benefit from the home scoring.  Cal Clutterbuck on the other hand, appears to be getting screwed by his home scorer. For 2011-12, Clutterbuck is actually averaging less hits per game at home compared to on the road.. Compare that to his 2009-10 season where he averaged 1.38 more hits per game at home and the Wild as a team had 53% of their hits at home.

For those who are curious, the Chicago Black Hawks have the highest percent of total hits at home with 61.7%.  The Hawks ranks 27th overall in hits and dead last for hits on the road.  The New York Rangers have the most hits in the league with 2347, 51.8% of them occurring at home.  Here's the entire list. 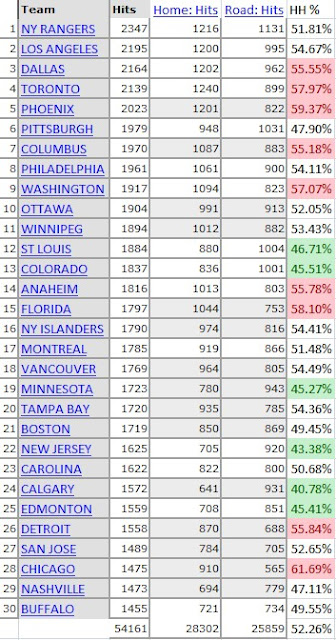 So what does this all mean?  It means I like hits, Matt Martin, playing with Excel and that I do not have enough math smarts to come to a anything but an inconclusive conclusion.

What do you think?  Is the hit stat legit?  Is Matt Martin's season record legit? 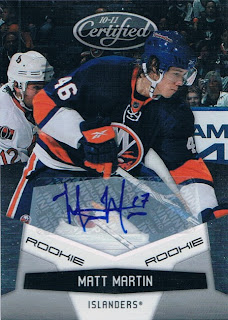