Whoops, I did it again

Every now and then I'll buy a card without seeing it.  Sometimes it's just base cards from Sportlots.com but other times I buy cards off of SportsCardForum without seeing a scan.  When the cards come in the mail, it's like ripping into a wax pack, except you know what you're getting, but you still don't know what they look like.  I bought a 2003-04 Topps Pristine Marty Turco autograph as part of a lot purchase from a member on SportsCardForum.  A week later, I saw an awesome looking Turco autograph on eBay and my opening bid won the auction.  The card in the auction? 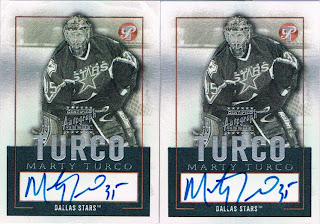 The nice thing is that this is a great looking card.  A scan does not do it justice.  Its shininess can only be appreciated in person.  Also, I spent a little over $5 total on the pair, so it is an easy mistake to swallow.  Unfortunately Turco's return to the NHL has not been as pleasant.  He sports the worst save percentage of any goalie who has played over 100mins this season. His return to the NHL has actually cost him 3 spots on the all-time career GAA leaders, dropping him down to 17th overall.  The only good thing that could occur if the Bruins repeat, will be if Turco gets his name on the Cup.

Update:  Argh.  After posting this, I found out Turco is not eligible to play in the Stanley Cup Finals.  Since he was signed after the trade deadline, he cannot play in the play-offs.  That sucks.
Posted by JGBlargh at 2:54 PM