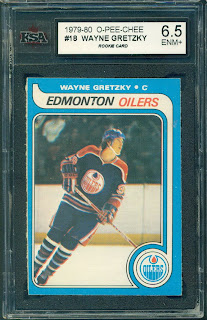 I need on of these for my 1979-80 OPC set and I wouldn't settle for anything other than a graded copy.  I'd be too worried about it being a fake otherwise.  I would settle for one graded 6.5 since I don't want to break the bank for it either. 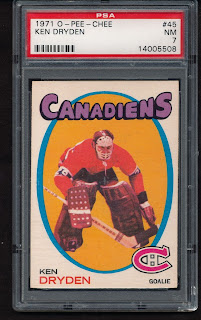 There is a certain allure about Ken Dryden and his cards.  Perhaps it is because he won't allow any new cards with his likeness to be produce, so therefore, there's not a thousand different cards of him.  That makes his RC an easy choice, especially when dealing with $1600 and only 30 minutes. 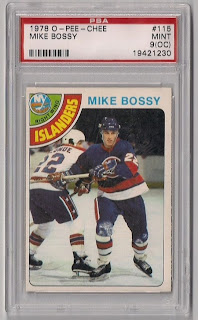 Although I rarely got to watch Mike Bossy when I was a child, he became my all-time favourite player.  I already have a few copies of his rookie card but none of them are graded. This card is a classic. 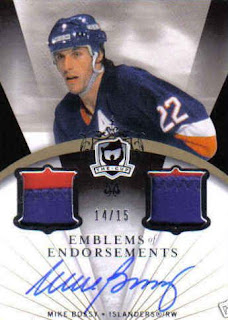 2007-08 UD Cup Mike Bossy Patch/Auto #/15 - BIN $175
A beautiful on card auto with two two colour patches.  Not the most unique patches but thus was the best one on eBay during my 30 minutes.  I could go through $1600 without adding a Mike Bossy patch/auto card. 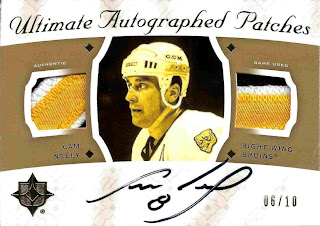 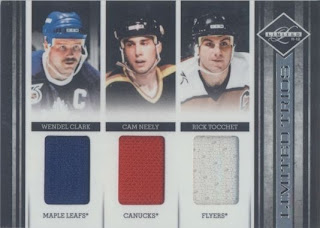 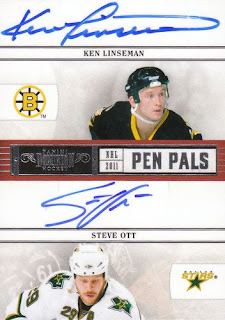 I overpaid for this one.  There are a few nicer ones already BIN and at a lower price.  But this a card I really want.  If I had more time on eBay, as in days or weeks, I would have waited this one out until a nicer version came out.  By either via fantasy or reality, I will own a version of this card someday soon. 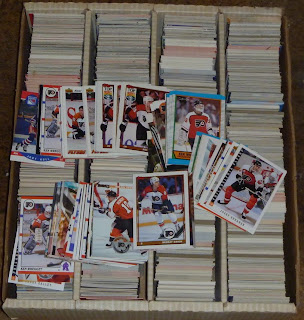 This is another card which I overpaid.  I know a couple of these went in the past for $15.  I love the pairing on this card.  It's very well matched.    Linseman has a terrific auto.

3200ct box of Hockey Cards - BIN $60 + $25 S/H
The contest didn't mention shipping and handling but I figure I better add it in for this one.  I love going through boxes of hockey cards to see what treasures may lie within.  I don't mean patch or auto cards, even a Bob Corkum or Donald Audette card could trigger a treasured childhood memory or at least bring back the joys of being a kid who could appreciate a card without wondering how much it goes for on eBay.  I just hope this box isn't as Flyers heavy as in the picture. 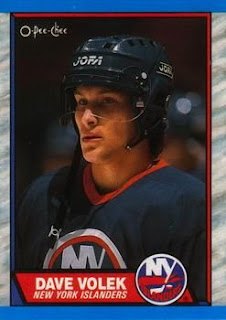 1989-90 OPC Dave (David) Volek RC - BIN $1
Last, but not least, is a David Volek rookie card.  Volek scored the game seven overtime goal that sent the heavily favourite, and defending Stanley Cup champs, the Pittsburgh Penguins to the golf courses, while the New York Islanders, and a very young me, went to cloud nine.  I do already have this card, but I got when I got the 1989-90 OPC factory set as a kid, well before Volek's goal, but he deserves a place amongst my Hockey Greats RC collection.  I was looking for a Graded copy but there was none on eBay.  According to the PSA population report, there is only one 89-90 Volek RC ever graded by them.  It was a 10.  In comparison, journeyman NFL QB Billy Volek has had 135 of his SP Authentic rookie card sent in to be graded.


So there it is, $1600 in 30 minutes, or less.  Every dollar spent.  Check out the contest at Drop the Gloves to see what other bloggers are buying and for a chance to enter as well.