One Sheet, One Star: Mike Gartner 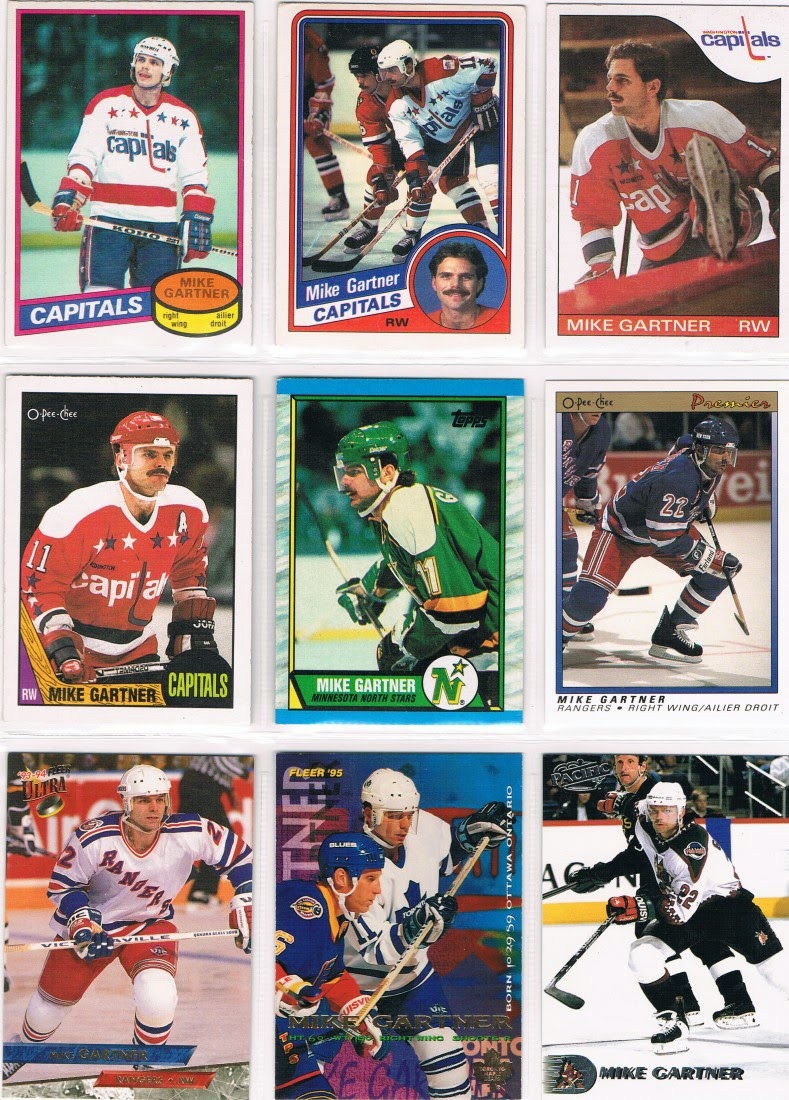 I believe Mike Gartner heads up the list of players who were very good for a long time category in the Hockey Hall of Fame.  He only has one 50 goal season and one 100 point season.  He was a little better than a point-per-game during hockey's offensive heyday of the 1980s.  He never won an award or made a post season all-star team.  What he did do was score 30 or more goals in 15 straight seasons and netted 708 goals for his career.
Mike Gartner started his professional career with the WHA's Cincinnati Stingers.  The Stingers were one of two WHA teams that were not included in the NHL's absorption of the WHA.  That left Gartner eligible for the 1979 NHL Draft.  The 1979 draft was extremely deep due to the lowering of the age restrictions and the availability of several young stars who had played in the WHA the previous season.  Gartner was selected 4th overall by the Washington Capitals. 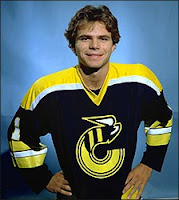 Gartner's best season was with the Capitals in 1984-85, scoring 50 goals and 102 points.  His blazing speed and scoring prowess helped him get selected to the 1984 and 1987 Canadian Canada Cup teams. Gartner would call the 1987 Canada Cup the highlight of his career.  He was never able to win a Stanley Cup, but did win two Canada Cups.  Gartner had 9 points in 17 Canada Cup games. 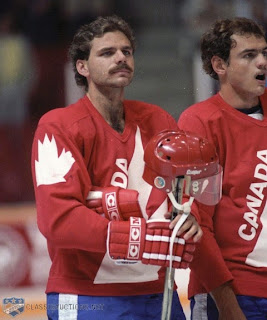 The Capitals were a very good regular season team, but could never make it our of the Patrick division in the play-offs, regularly losing to Islanders in post season play.  Near the 1988-89 trade deadline, the Capitals made a traded to get grittier.  They sent Gartner and Larry Murphy to the Minnesota North Stars for Dino Ciccarelli and Bob Rouse.  The following season at the trade deadline, Gartner was on the move again, back to the Patrick division, to the New York Rangers.
Gartner would come close to scoring 50 again in 1990-91, making a serious push for it as he scored 8 goals in the last 7 games.  Instead he had to settle for hockey's Cy Young award, with 49 goals and  20 assists.  Things really started to look up for the Rangers as the "Messiah" Mark Messier was acquired for the 1991-92 season.  Messier did deliver the Stanley Cup to New York in 1994, unfortunately Gartner was a victim of the Oilerization of the Rangers.  The Rangers boasted six former Cup winning Edmonton Oilers on their Cup wining team.  Gartner was traded to the Toronto Maple Leafs at the 1994 trade deadline for Glenn Anderson.
While with the Leafs, Gartner made it out of the second round, as the Leafs lost in the semi-finals to the Vancouver Canucks.  Gartner never won a Stanley Cup during his career.  The following season marked the end of Gartner's 15 straight 30 goal seasons, since matched by Jaromir Jagr.  While the shortened lock-out season made getting 30 goals difficult, Gartner was only on pace for 26 goals over a full season.
Mike notched two more 30 goal seasons, one with Toronto in 1995-96 before being traded to Phoenix, where he notched his last.  He retired as a Phoenix Coyote with a total of 708 career NHL goals.
Gartner did win one award of note in the NHL.  In 1993, he was selected as the All-Star MVP after scoring a record four goals, which he shares with a few other players. Mike played in  seven All-Star games and won the fastest skater competition three times at the skills competition.

So where does Gartner rank in terms of greatness?  He never had a high peak but played a very good level for a very long time.  Is he really deserving of the HHOF?