One Star, One Sheet; Brett Hull 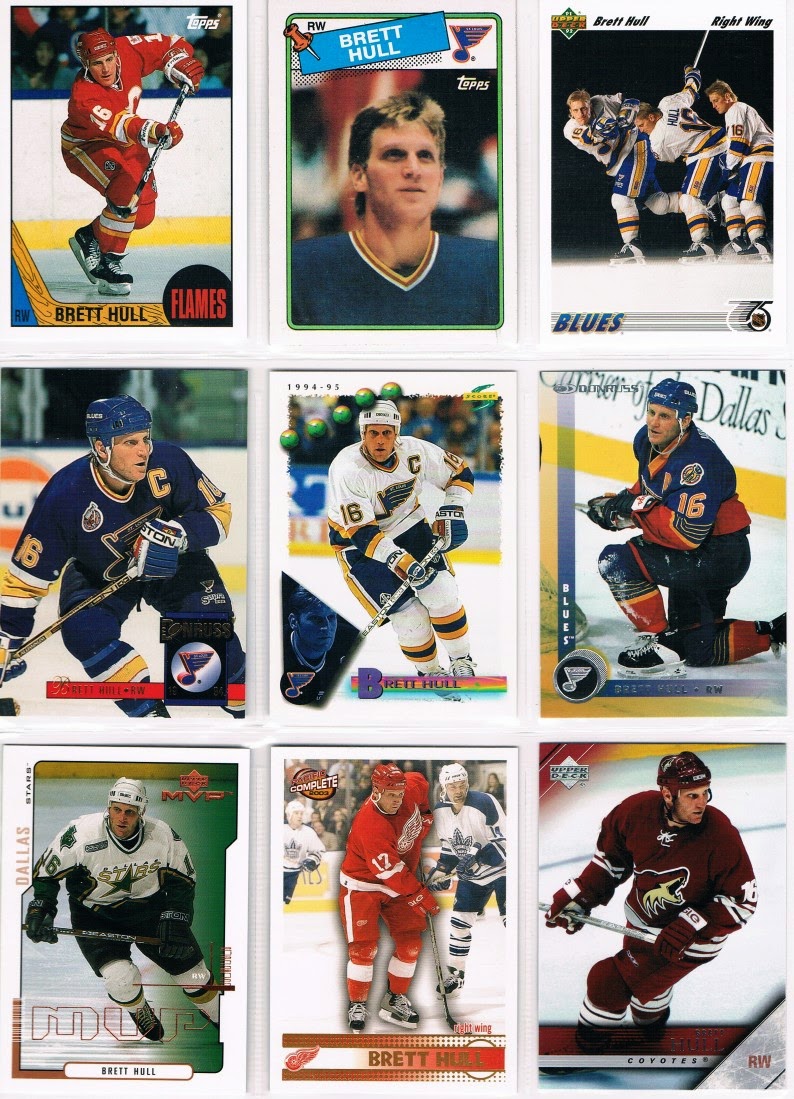 Whoa, what's up with the Flames card?  I went a bit out of order on the release dates on this one.  That card is from a insert set from 2003 -04 Topps, called the Lost Rookies.  (*insert shameless plug* I do lost rookies too, check them out)  I included this post-pre-rookie (huh?) to have his Flames days represented.  I was a big Flames fan as a kid as Hull was blowing up in the early 1990s.
Hull was drafted by the Flames 117th overall in the 1984 draft.  It's not like the Flames didn't know they had a future star on their hands.  He had the lineage, being Bobby Hull's son.  He scored 50 goals in 67 games in the AHL in 1985-86.  In 52 games with the Flames in 86-87, Hull scored 26 goals and 50 points in 52 games before being traded.  True, the Flames picked up two pieces of their 1989 Stanley Cup winning team in Rob Ramage and Rick Wamsley.  Still, you have to wonder what if the Flames kept Hull.
Hull would set the league on fire as a St. Louis Blue.  In 1988-89, he scored 41 goals in his first full season with St. Louis, and then followed it up with seasons of 72, 86, and 70 goals.  In 1990-91, Hull won the Hart Trophy as league's MVP.  It was Hull and Oates mania.  His 86 goals are the highest by a player not named Wayne Gretzky.
Hull scored 50+ goals in five consecutive seasons.  He only one of six players to have five consecutive 50 goal seasons and was also the last to do so.
Gretzky and Hull would be united after the Blues won the Gretzky trade sweepstakes in late February of 1996.  The expected explosion of offense never materialized.  During 15 regular season games together, Gretzky only set up three Brett Hull goals.  The Blues lost in the second round of the play-offs in seven games to the Detroit Red Wings.  Gretzky left via free agency in the off-season.  Hull and the Blues would also be disposed of by the Red Wings in the play-offs in the two following seasons.
In 1998, Hull signed as a free-agent with the Dallas Stars.  For the first time in his career, his team would make it past the second round, and this time they would win the Stanley Cup, albeit on a questionable triple overtime goal.  At least Brett is above rubbing it in....


Hull played three season with the Stars, winning one Stanley Cup.  He would repeat that with the Detroit Red Wings; three seasons, one Cup. After the lost season of 2004-05, Hull retired five games into the 2005-06 season as a Phoenix Coyote.  Making him the second 700 goal scorer to retire as a Phoenix Coyote. Any guesses on the other one?
I don't have much to say on Hull since he was such a well covered player through out his career.  I guess I should mention that he is the son of HHOFer Bobby Hull and they hold the record for most career goals by a father and son.  Perhaps if the Flames never traded him I would be in the mood to go more in-depth on him.
Posted by JGBlargh at 1:15 AM