One Star, One Sheet: Dale Hunter 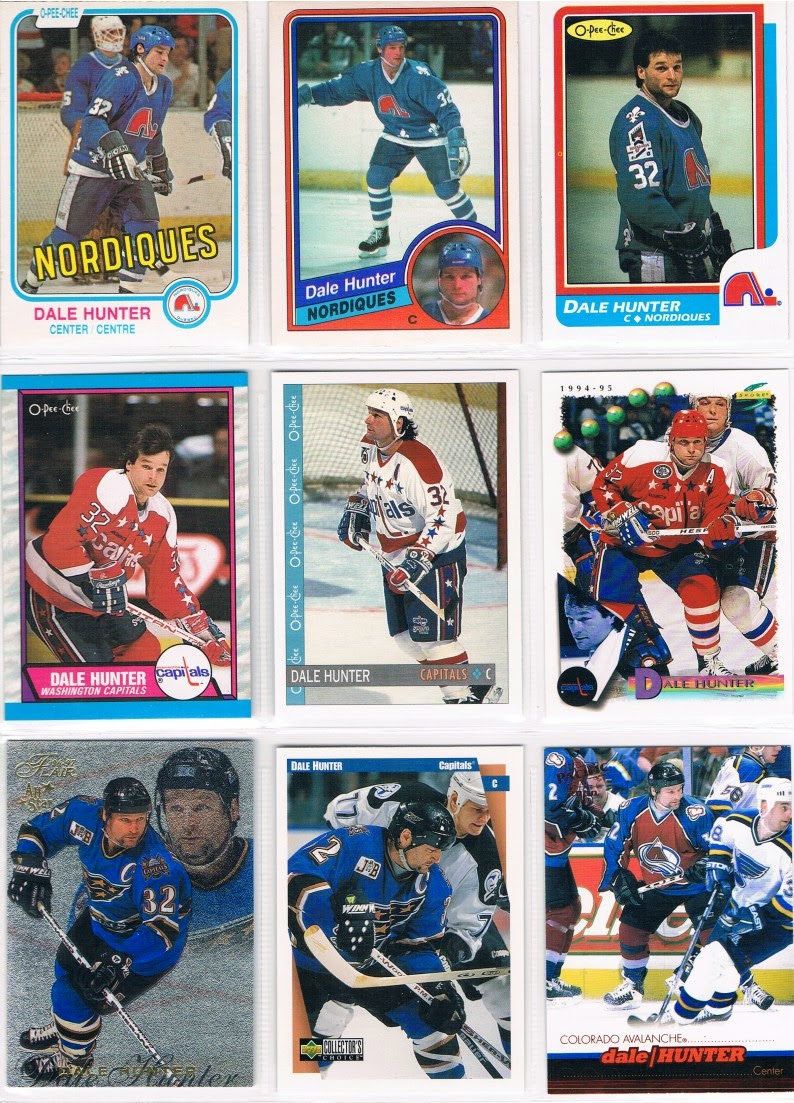 Dale Hunter is one of those player you hate, until he's on your team.  Which becomes obvious once you know his nickname was "The Nuisance".  Hunter had eight seasons were he scored 20+ goals and had 200+ PIM - twice as many as any other NHL player in history.
Hunter was selected 41st overall in the 1979 draft by the Quebec Nordiques.  In his first NHL game on October 9, 1980 against the Calgary Flames, he notched two assists.  He added three more assists in the next game against the Edmonton Oilers.  Hunter scored his first NHL goal against Richard Brodeur of the Vancouver Canucks on October 29th, 1980.  Hunter finished his rookie season with 19 goals, 44 assists and 226 PIM.
Hunter, born in Ontario, became a key figure in the Battle of Quebec.  In game five of the opening round of the1982 play-offs, Hunter scored 22 seconds into overtime against the Montreal Canadiens.  The goal gave the Nordiques its first NHL play-off series win.  The Nordiques would make the play-offs in all seven seasons Hunter played, including two trips to the Conference Finals.
1983-84 would be an eventful season for Dale Hunter.  Hunter earned his first NHL suspension; three games for slashing Mike Ramsey in the face during the overtime on March 4, 1984.  The three game suspension would be the only three regular season games Hunter missing during his first six seasons.  Quite a feat for a player who played the style Hunter did.  Hunter set a career high in points with 79 during the 83-84 season.
The Battle of Quebec reached it's boiling point during the 1984 play-offs with the Good Friday Massacre.  At the end of the second period, Hunter pushed Guy Carbonneau to the ice.  What started as a minor scrum turned into a bench clearing brawl and both teams joining the fray.  A Louis Sleigher sucker punch ended the first brawl.  The second brawl started with Dale's brother, Mark Hunter going after Sleigher.  This game gets replayed a lot as a "Classic" game, so there is a chance you might see this game on tv.  After the two brawls, seven goals are scored in the third period in this series clinching game, so it is a good game to watch on top of the brawling.  Do I have to mention that Dale Hunter, #32, is in the middle of both brawls?

Hunter would play a few more seasons with Quebec before being traded, with Clint Malarchuk to the Washington Capitals for Alan Haworth, Gaetan Duchesne, and a 1st round pick.  While Haworth and Duchesne would play a combined three seasons for the Nordiques, the first round pick would score over 600 goals, win two Stanley Cups and enter the HHOF in 2012 for the Quebec/Colorado franchise.
Hunter played over 11 seasons with the Washington Capitals, including five as captain. His number 32 is one of four numbers retired by the Capitals.  One of the highlights of Hunter's time as a Capital would be his game 7 overtime goal versus the Philadelphia Flyers in the 1988 play-offs.  One of the lowlights would be his game 6 cheap shot on Pierre Turgeon.  Hunter claimed he thought the play was still on and he never saw the puck go into the net.  The NHL would suspend Dale Hunter for 21 games.  The longest suspension ever handed out by the NHL at that time.
Hunter matched a career high with 79 points in 1992-93.  It was his last good offensive season, as he never had more than 46 in any future season.  In Hunter's last full season as a Capital, the team made it to the Stanley Cup final.  They were swept by the Detroit Red Wings.
During the 1998-99 season, Hunter's last, the Capitals traded him back to the franchise that had drafted him, although it was now located in Colorado.  Hunter was used sparingly in the play-offs, averaging under seven minutes a game, as the Colorade Avalanche lost in the Semi-Finals to the Dallas Stars.  Hunter retired in the offseason.
Hunter, and his brother Mark (who is also prominent in the Good Friday Massacre) together bought the London Knights of the OHL.  Dale has coached the team since 2001, with a breif hiatus in 2011-12 while he coached the Washington Capitals.  The Knights won the 2005 Memorial Cup and set an OHL record by pulling off a 31 game unbeaten streak. 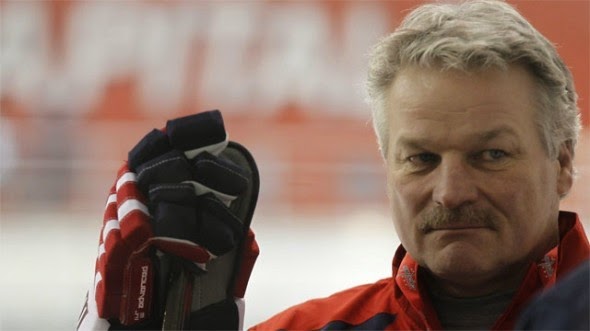 Dale is perhaps the least offensively skill players to score 1000 points.  He never scored 80 points in a single season and has the lowest ppg of any 1000 point scorer.  What he can claim is to be the only 1000 point player with over 3000 pim.  In fact, his 3565 career PIM is second all-time.