One Star, One Sheet 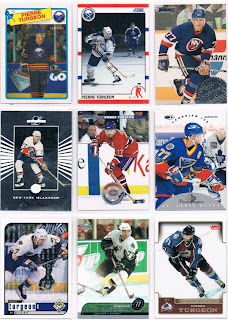 To steal piggyback on an idea from My Hockey Card Obsession, where they are doing one set, one sheet, I am going to start creating One Star; One Sheet.  I can't collect every card from every player and still be able to display them.  I think by breaking down a players career into nine cards, I can make a nice binder to browse through.  For most players I will attempt to get a RC of player and a last card of the player.  Some players I won't attempt to get a RC since I have most of the 80s rookie already and don't want to spend hundreds in getting them again for this project.  Some players, like Pierre Turgeon, retired during the season and their final cards don't have their entire career stats.  I'd also try to get a card from each team they played for.  Not sure what I'll do for players who played for more than 9 teams or a player who spent most of their career with a team or two but then played on several in their last couple of years, like Paul Coffey.
Posted by JGBlargh at 1:02 AM