It's a success since he signed.  it's a bit of a failure since I printed and sent the 4x6 customs before I properly learned how to print.  Two 4x6 pictures ended up heavily smudged.  The third one has light light smudging.  I think that one was on top.  Still, I am really happy with the way the autos looked on the pictures.  I may go back and try to reprint the pictures and resend them.
Peter Sidorkiewicz was a goalie in the early 90s.  He had a few good years with the Hartford Whalers, including  making the All-Rookie team in 1988-89.  In 1992, Sidorkieiwcz was selected by the Ottawa Senators in the expansion draft.  In the season opener for the new franchise, Sidorkiewicz helped the Senators defeat the visiting Montreal Canadiens by a score of 5-2.  The team would go on to win 9 more games out of the remaining 81.  Sidorkiewicz made his only All-Star game appearance.  In the offseason he was traded to New Jersey for fellow All-Star teammate Craig Billington.  In New Jersey, Sidorkiewicz played a total of 4 games over the course of five season, spending most of his time in the minors.  He is currently on the coaching staff of the Erie Otters of the OHL. 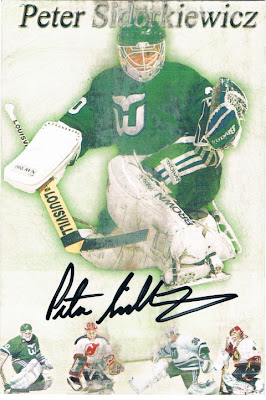 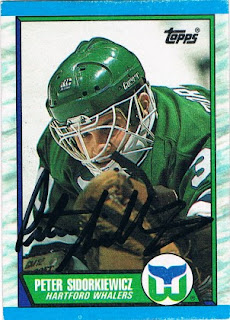