I finally received my DACardWorld order.  On Christmas Eve I got a message on the answering machine saying that I had to call some guy about my card order.  I called it and it turns out D&A put my cards and invoice in the wrong box and had sent it off.  The guy who got my cards was pretty pissed.  I think he was hoping that I had his package and we could switch them in time for Christmas morning.  Or perhaps he thought since I was so close to the North Pole that I could get Santa Claus to drop them off.  I didn't have his cards.  I had only order the previous week and didn't expect to see them in another 2-3 weeks at least.  In the end, I did get his cards.  D&A told me to keep them.  The other guy sent my cards back to D&A and they reshipped them.  I can see why he was so mad.  He got a bunch of sportscards when he had order Lord of the Rings game cards.  Everything worked out in the end for me.  I had to pay customs on both boxes, but I assume I can get that back if I sell the Lord of the Rings cards.  I sure don't have any use for them. 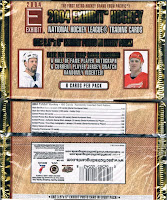 Collation was very good.  I hit all the stated odds plus a little extra.  For base, I got 105, including 8 doubles, for a 92% unique rate.  There is 150 regular sized cards in the base set.  For the yellow-back parallels I got 25, including one double.  I like the yellow backs, cause they are easier to read, better but what a stupid way to make a parallel set. At least the blue-back versions are numbered so it makes them slightly more interesting.
Other than the stupidity of the parallels, I really like the base set.  The design is simple and attractive.  The backs have the career stats and  some info on each player.  The pictures themselves tend to lack action but every one is a full body shot of the player.  One issue I have is that this set must have been an early season release since there are many cards of players in their former teams jersey but with their current teams logo.   I love the feel of the cards.  It's a thicker cardboard stock and the backs remind me of the vintage style.  As a collector and a TTMer, I am a big fan of the base.

The three blue back variations I got, each numbered out of 275, were Brendan Morrow, Ales Hemsky and Keith Tkachuk.  The card front is the exact same as the base and yellow back version.  Other than the numbering, it's a very underwhelming parallel set, but then again, aren't most parallels underwhelming.

The rest of the inserts are simple and once again, underwhelming.  I like my base cards to be simple, but I like by inserts to wow.  They feel more like subsets rather than inserts.  The Standing on Tradition design, which is exclusively goalies, is the only one that makes me look twice. 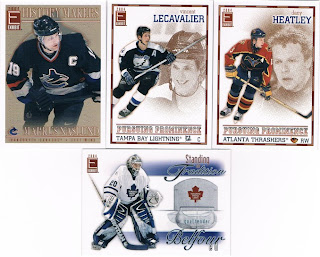 For the oversized 3.5"x5", collation was perfect and then some.  I got a jersey card, time warp, 3 blue backs, #'d out of 425, and 24 base.  The base have a different design on the front but has the same back.  Just the regular base, I really like these.  The player stands out against the sepia tone background.  The stock and the design gives a real vintage feel to it.  There are 50 over-sized cards in the base set.  Player selection for the regular sized cards vs the oversize is mutually exclusive.  My three blue backs were Patrick Roy, Vincent Lecavalier and Olaf Kolzig. 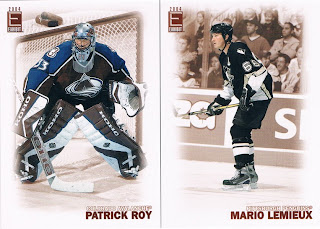 One of the two hits is the box is a over-sized jersey card.  There is one jersey card per box.  The design is decent.  Although with such a big card, you'd think the jersey piece would be bigger.  There are 20 jersey cards in the set but the player selection is fairly mediocre.  Most of them wouldn't make the the all-star game.  Considering the options, I am happy with the card I pulled, Sean Burke. 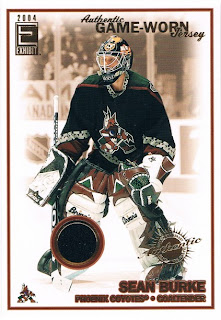 Now it's the moment you have been waiting for, coming in at one per box, the Time Warp card 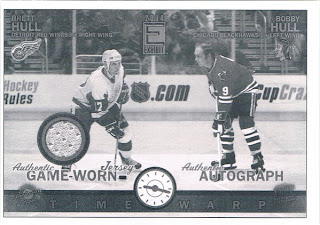 WTF?  Are you kidding me?  Get out of town!  I fart in your general direction.

There are 10 Time Warp cards and one of them is a redemption.  Of course, I pulled the redemption.  Expiration date, December 31st, 2004.

Overall, even with the expired redemption, I am quit pleased with the box.  After shipping costs, it came out to around $1.50 per pack.  I am on the fence about collecting the set.  If I went for the set, I'd buy another box, with hopes of pulling a non-redemption Time Warp.


All inserts and parallels are for trade.