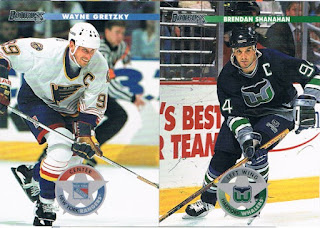 The base cards have a nice basic design and consists of mainly full or upper body shots; no head shots.  The photography is good and it's great to see some of the old gang, even if there are unfamiliar places.  The rookie subset is made up of 25 cards with very few being actual rookies.  The top rookie card is Steve Sullivan.
The back includes another body shot.  Stats are provided for there entire NHL career, not just one year, and if space provides, there is a brief blurb on the players exceptional abilities. 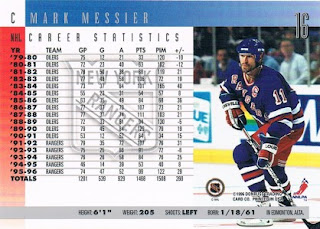 The parallel set is Press Proof, with each card boasting to be one of the first 2000 printed.  There is no actually numbering but the card is blinged out with gold foil and the star is punched out on each card.  Felix Potvin and Scott Mellanby were the two I pulled. 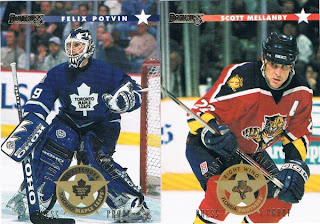 There are several other insert sets.  I pulled a Doug Weight Hit List and a Patrick Roy Donruss Elite.  Both cards are serial numbered out of 10,000.  The Roy insert is actually one the top cards I could have pulled from the box with a high BV of $15.  It is a sharp, and shiny, looking card. 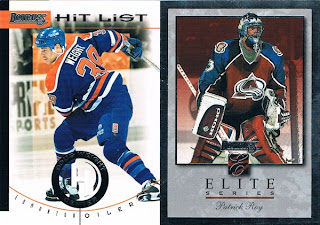 Overall a decent box for a cheap price.  It was a nice journey down memory lane.  One so nice, I am going to do the set instead of using the cards for TTM or other projects, as originally planned.  The box had good value and was great for a pack ripping fix.

Since opening the box, I have snagged a few more cards and I am done to 3 needed for the set.  I am looking to trade for #15 Todd Gill, #51 Denis Savard and #56 Dimitri Khristich.
Posted by JGBlargh at 3:39 AM