On, Februay 6,1996, at the 12:51 mark of the second period, Colin Camplbell, coach of the New York Rangers, had finally seen enough.  He told the rookie netminder to get his helmet on.  The Colorado Avalanche had just scored their 7th goal of the game.  Normally, it'd be veteran Glenn Healy playing the back-up role, but starter Mike Richter had suffered a groin injury and it was Healy who had been facing the onslaught of the eventually Stanley Cup.  And so began the NHL career of Jamie Ram.


After allowing 31 shots in the first 33 minutes, the Rangers only allowed 9 shots the rest of the game,  Jamie stopped all 9 shots.  At the end of the game, the final score was 7-1 for the Avalanche.  The end of the game would also mark the end of Jamie Ram's NHL career.  Mike Richter would return to the line-up a few games later and Jamie was sent to the minors.  Richter would re-injure the groin 11 minutes into his first game back.  Over the course of the 1996-96 season Richter would miss 23 games due to groin injuries.  Glenn Healy would play all but 27 minutes of those games.  In fact over a span of 4 seasons, 1993-97, Jamie Ram's 27 minutes were the only minutes not played by Richter or Healy for the New York Rangers.  Jamie was with the wrong team at the wrong time.
Jamie Ram, originally drafted by the New Yrok Rangers in round 10 of the 1991 Entry Draft, would continue his quest of the NHL.  He was part of the San Jose Sharks and Anahiem Ducks franchises and in 2000, was the third goalie of Team Canada in the World Hockey Championship.  Jamie eventually took his equipment overseas and played seasons in Japan, Sweden, Finland and Russia before retiring in 2004.  In 2006, Jamie was signed a few times as an Emergency back-up by the Pheonix Roadrunners in the ECHL, but unlike his NHL call-up, he never got on the ice. 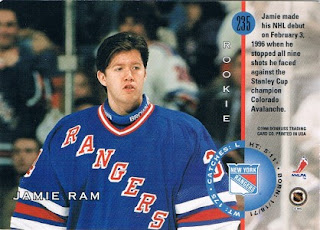 Email ThisBlogThis!Share to TwitterShare to FacebookShare to Pinterest
Labels: Goalie, Rangers, The Forgotten