Can you name the goalie who backstopped Team Canada to it's first ever World Junior Hockey Championship (WJC) Gold medal?  If you said Mike Moffat, you are either know your hockey, or you guessed it from the title of the post.
Mike Moffat, a 8th round draft pick by the Boston Bruins in 1980, played his junior hockey with the Kingston Candians.  He played good enough, a 4.14 career OHL GAA which was actually good in those days, to get himself on Team Canada for the 1981 WJC.  Team Canada had never won a Gold medal in the WJC before.  With the exception of 1978, the Memorial Cup winners would represent Canada.  After a dismal 7th place finish in 1981, the Canada's Program of Excellence was created and the best under age nineteen players would represent Canada the following year and every year since.  Team Canada, not favoured to medal, exceeded all expectations.  They went 6-0-1 in the tournament, including a shocking 7-0 trouncing of the favorites, Soviet Union.  Mike Moffat recorded the shutout and he was between the pipes during the final game versus Czechoslovakia.  Team Canada, once again the underdog, needed a tie to clinch the Gold medal, while the Czechs needed a win.  Moffat would turn aside a late barrage by the Czechs to preserve a 3-3 tie and Canada's first WJC Gold medal.


Moffat would make a splash in the NHL before the season was over.  Mike started the last two games for the Boston Bruins and was then anointed the starter for the play-offs, over incumbents Marco Baron and Rogie Vachon.  Although as shocked as anyone, Moffat played brilliantly through the first round and carried the Bruins into the second round.  Still only a teenager, the pressure started to get to Moffat as the Bruins fought the Quebec Nordiques in a grueling seven game series.  The fans and press were comparing Mike Moffat to a  young Ken Dryden.  As the series went on, Moffat allowed a few weak goals and the Bruins would eventually fall to the Nordiques in game seven, by a score of 2 to 1.  As the last few seconds ticked off the clock (and as Terry O'Reilly takes a swing at referee Andy Van Hellamond) Bruin coach, Gerry Cheevers attempted to console his young goalie. 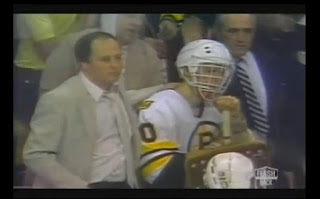 Mike Moffat would never again reach the level of play he had achieve in the 1981-82 season.  He would only play 17 more NHL games and by age 22, Moffat would officially retired from professional hockey.  The pressure of the Stanley Cup play-offs was too much for a 20 year old who previously had a total of 2 career professional hockey games under his belt.  Here's a quote from a Boston.com interview

“My mental game needed massive rebuilding,’’ he says. “I should have dealt
with that in the offseason, but I just kind of denied it, put my head down. I was
fighting the demons and it was nobody’s fault but my own.’’

I find Mike Moffat's story tragic.  A young player who is living the dream at age 20.  Winning a Gold medal for Team Canada and earning top goalie honours.  Starting and staring for the Boston Bruins in the playoffs.  Except by the time the 1982-83 season had started, Moffat was already on the downside of his career.  He was mentally worn out.  The Bruins must have had wind of this, as they traded for Pete Peeters in the offseason and to further Moffat's decline, Peeters went on to win 40 games and the Vezina  trophy.  What I also find tragic is that, based on the few interviews I have read, Moffat does not appear to cherish his time in the NHL.  In regards to the press clippings of his playing days, Moffat claims to never look at them since "“I guess it would make me cry."  I really do hope that's not the way he truly feels about his hockey days.  He just had too much pressure too soon. His career may have been totally different if had a few seasons in the AHL instead of being thrown directly into the spotlight.

Mike Moffat never had a NHL card.  For the 1982 set, OPC went with Rogie Vachon, the Bruins #2 goalie during most of the 81-82 season, and newly acquired, and airbrushed, Pete Peeters.  Leaving rookie Mike Moffat and the teams #1 goalie Marco Baron without cards.  Coincidentally, Marco Baron never has never had a rookie card either.  So below is Mike Moffat's lost rookie card.