I Would Love Not to Hate This Card

I was browsing eBay and I came across this card. 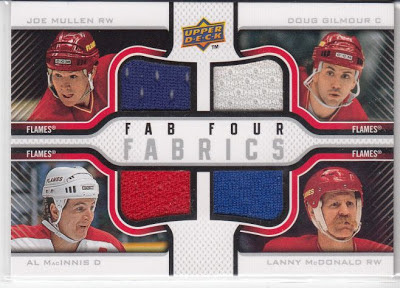 This is the type of card I have been looking for.  I remember cheering for the Calgary Flames in the late 80s.  I remember watching Steve Smith's gaffe, the Monday Night Miracle and Brian Skrudland's overtime goal in 1986.  It was bitter disappointment.  I lived near Edmonton at the time and my favorite team was the New York Islanders, followed closely by whoever was playing the Oilers.  After that play-off run, the Flames became my Campbell Conference team.
In 1989, the Flames were a powerhouse.  Gretzky was out of Edmonton and it seemed the time was right for another deep play-off run.  The Flames almost never made out of the first round.  It took a puck off the skate of Joel Otto in overtime of game seven for the Flames to beat the Vancouver Canucks, a team that was 43 points behind the Flames in the regular season standings.
The second round would have the Flames face their old nemesis, Wayne Gretzky, but without the supporting cast he had in Edmonton, The Great One couldn't hold back the Flames.  Gretzky had points on nine of the Los Angeles Kings eleven goals.  The Flames would sweep the Kings in four games.
The Campbell Conference final would match the Flames up with an unlikely foe.  Back in 1989, the first two rounds was within each division.  The other division in the Campbell Conference was the lowly Norris division.  In the regular season, the Detroit Red Wings won the division with 80 points, but it was the cinderella Chicago Black Hawks who won in the play-offs.  The Black Hawks had 66 points in the regular season, the lowest of all play-off teams.  They were dispatched by the Flames in five games.
Then came the rematch, Calgary Flames versus the Montreal Canadiens.  By far, the top two teams in the regular season and play-offs.  The Canadiens had beaten the Flames in 1986, and early on, the series was looking just like that one.  The Flames won the first game and then would lose the the next two.  In 1986 Skrudland won Game 2 in overtime for the Canadiens, in 1989, Ryan Walter would be an OT hero in Game 3.   Unlike 1986, the Flames had a deeper team and found a way to win the next three games, including two in Montreal, to win the Stanley Cup.

There were alot of great players on the 1989 Flames.  First off, you have the four Hall of Famers on the card, Joe Mullen, Doug Gilmour, Al MacInnis and Lanny McDonald.  Then you also have Theo Fleury, Mike Vernon, Gary Suter, Joe Nieuwendyk, Hakan Loob, Rob Ramage and Joel Otto.
I really wanted that Fab Four Fabrics card but I can't stand cards that should players in one team's jersey but then includes a jersey piece that is from another team.  Mullen's piece is from a St. Louis Blues jersey and McDonald's appears to be from a  Toronto Maple Leafs jersey, or considering it's Upper Deck, an alumni game.  I checked eBay for another one and I did find another, but this time Gilmour's jersey was black.  Must have been from his short-lived Black Hawks days.
So I fixed the card.  This is how it should look like.  Four jersey pieces that all appear to be Flames jerseys. 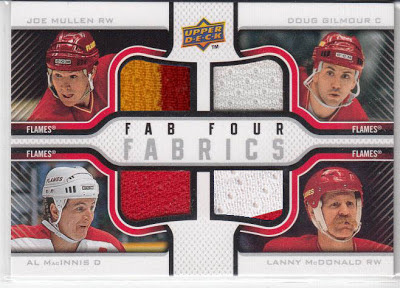 What do you think?  Does matching the player picture to the jersey piece colour factor into your decision to buy a card?