In possible the worst trade ever in the history of hockey, on May 22nd, 1970, the California Golden Seals traded away their first round draft pick in the 1971 Amateur Draft, Francois Lacombe and cash to the Montreal Canadiens for the Canadiens 1st round pick in 1970 and Ernie Hicke.  The Golden Seals would draft Chris Oddleifson with Montreal's 10th overall pick in 1970.  The following year, the Canadiens would use California's 1st overall pick to select Guy Lafleur.  Great trade by Canadiens GM Sam Pollock, but what in the world was the Golden Seals GM, Frank Selke Jr, thinking?
In 1969-70, the season before the trade was completed, the Golden Seals made the play-offs, and the Canadiens had not.  Although that was the last season where one division was all expansion teams and the other was all Original Six teams.  The Seals made the play-offs with 58 points, good for 4th place in the West.  The Canadiens finished with 92 points and they finished 5th in the East after losing a tiebreaker to the New York Rangers.  So, perhaps Selke Jr was thinking the Seals were on the way up and the Canadiens were on the way down, and that the 1971 pick would be a late first rounder and not the first overall.  Assuming he gave a damn about draft picks in the first place.


Prior to the 1969 draft, the majority of young stars were already own by teams through the sponsoring of junior teams.  Basically a NHL team would buy a junior team and then they would exclusive rights to negotiate contracts with those players.  For example, the Boston Bruins bought the Oshawa Generals, just so they could sign a 14 year old Bobby Orr to a contract.  So when the Seals traded the pick to the Canadiens, no player who had been acquired through the draft had made an impact in the NHL.  The first 10 picks from 1969 had combined for 18 points in 44 games.  Even earlier draftees that would go to stellar careers had yet to become stars, players such as Ken Dryden, Syl Apps, Pete Mahovolich and Brad Park.  So the draft did not hold the same importance as it does today.
The Seals had a history of trading the Montreal Canadiens 1st round choices.  From 1968 to 1973, Montreal Canadiens acquired five first round picks from the Seals.  The other two first round picks prior to Lafleur, Jim Pritchard, 3rd overall in 1968, and Ray Martrynuik, 5th overall in 1970, failed to make an impact in the NHL.  They combined to played zero games in the NHL and 2 WHA games. The following two had a bit more success, Michel Larocque, and Tom Lysiak.  All of the other 1st round picks were traded to the Canadiens prior the 1971 pick and all were traded to the Canadiens by Frank Selke Jr.
The Canadiens also needed a future face of the franchise.  In the 1968 and 1969 Amateur drafts, the Montreal Canadiens were given cultural choices.  The had the option to forfeit their first round choice in exchange for picking two french-Canadian players with the 1st and 2nd overall picks of the draft.  In 1969, they selected Michel Plasse and Roger Belisle.  In 1969, they selected Rejean Houle and Marc Tardif.  while not bad players, they paled in comparision to the top french-Canadian in 1970, Gilbert Perreault.  With not being able to select Perreault with a cultural selection, the Canadiens were still looking for a heir apparent for Jean Beliveau as the next great francophone Montreal Canadien star. 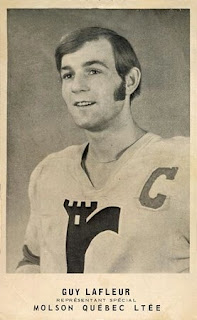 The Canadiens had their eye on Guy Lafleur.  A star in the QMJHL, Lafleur scored 103 goals in 1969-70 and then followed it up with 130 goals in 1970-71.  Even if the Seals didn't finish last, there was also Marcel Dionne available at the draft.  But that wouldn't do for the Canadiens,  they traded aging star Ralph Backstrom to the Los Angeles Kings during the 1970-71 season.  The Kings had finished last in the NHL the previous season and were near the bottom of the standing again, challenging the Seals for last.  In hindsight, the trade seems unnecessary.  At the time of the trade, the Kings were the fourth worst team in the NHL, the Seals were the worst, although closely followed by the Vancouver Canucks.  The Kings were a .400 before the trade, and were basically a .400 team after the trade.  Perhaps the trade had a psychological effect on the Seals.  The Seals were by far the worst team in the NHL after the Backstorm trade, only wining 6 of their remaining 28 games. They dropped like a rock and cemented their last place finish.
In the end, the Canadiens got Lafleur and the rest is history.  Stanley Cups, accolades, trophies and the Hall Of Fame would await Lafleur.  For the Seals, Hicke was their second leading scorer in 1971 and Oddleifson would go onto a decent career, although he never played a game with the Seals.
So while we came up with a few possible reasons that might have factored into the Seals trading away the pick, we couldn't find a real answer.  The conspiracy theorists like to point our Frank Selke Jr's links to the Montreal Canadiens.  His father was their legendary GM in the 40s and 50s, and Selke Jr worked for the Canadiens as the publicity manager for years before joining the Seals as GM.  So he had a lot of ties to the Canadiens.   Although Frank Selke Jr had a horrible track record as a GM, he is a extremely well respected man and was a huge factor in the growth and support of Canada's Special Olympics program.  Perhaps he was just in way over his head as GM of the Seals.
Frank Selke Jr would resign in November of 1970.   The team would have six GMs in its first five years.  Future HHOFer and New York Islanders architect, Bill Torrey, would take over as GM after Frank Selke.  He would resign after a month.
But could you imagine if the Seals had held onto the pick and had drafted Lafleur?  Would the Seals still be in California?  Would the Canadiens still dominate the 1970s?
Posted by JGBlargh at 2:53 AM