No, not Jean.  Its Felix Potvin.  Felix "the Cat" spent two half-seasons playing for the Islanders.  During the 1990s, Potvin was a fixture between the pipes for the Toronto Maple Leafs, leading the league in GAA in 1993 and helping the Leafs reach back-to-back conference finals in 1993 and 1994.  Although by the end of his tenure with the Leafs, he led the NHL is losses in back-to-back seasons.  The Leafs made two major moves in the summer of 1998, hiring Pat Quinn and signing free agent Curtis Joseph.  Potvin was regulated to back-up.  Frustrated by rarely playing and no news on the trade front, Potvin walked out on the team in December.
It took over a month before the Leafs were able to deal Potvin.  His destination was the New York Islanders.  Potvin's days on the island were forgettable.  He lost his first five games and injured his groin in his eighth, forcing him to miss two months.  The following season was no better.  He struggled on a poor Islanders team and the back up was the Islanders goalie of the future, who was fast tracking himself to the starting gig.  A week before Christmas, Potvin was traded to the Vancouver Canucks.  (Milbury would later trade goalie of the future Roberto Loungo that summer to make room for the future goalie of the future, Rick Dipietro.  WTG Mike!)  With the exception of a spectacular late season run and play-offs in 2001 after being traded to the Los Angeles Kings, Potvin played out his career as a journeyman goalie.
During his time with the Islanders, Potvin played 33 games, won 7, lost 21, and tied 4.  I barely remember Potvin as an Islander, but those were dark days indeed.  Although once I saw this card, I had to have it.  I was randomly searching different players when I found it on eBay.  I have always liked Potvin and I loved that his card had a swatch that appears to be from an Islanders jersey.  I also have a fondness for stick cards.  The only thing I don't like is that the stick seems like it from the middle of the stick, meaning the inside of the stick.  It seems to be a theme for the SPX cards of that year.  Next on the list is a Joey MacDonald New York Islanders jersey card.  Anyone? 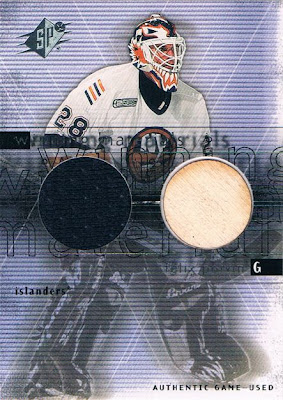