Since Shots Against became an official stat for goalies in 1983, only four NHL goalies have played in a game, but never faced a shot.  Rob McVicar is one of those four.  On December 1st, 2005, McVicar played 2 minutes and 44 seconds of relief for the Vancouver Canucks in a 5-3 loss to the Edmonton Oilers.  While McVicar never faced a shot, he was on the ice for a Canucks goal and got to race to the bench for an extra attacker in the wayning minutes of the game.
Another unique thing about Rob McVicar, is that he is the only NHL goalie to have been born in the Northwest Territorries.  McVicar was born in Hay River, NWT but he grew up in Brandon, Manitoba, so he can't be considered a true North of 60 product.
McVicar was originally drafted by the Vancouver Canucks in the 5th round of 2002.  McVicar played the majority of his pro-career in the ECHL.  146 of McVicar's 181 career North American professional games came in the ECHL.  It was in his third pro season when he had a chance to play in the NHL.  When Canucks starter Dan Cloutier suffered a season ending injury on November 20th, McVicar was called up to be the back-up to Alex Auld.  It took 10 games, including four earlier in the season, while sitting on the bench before McVicar got his chance to play.  While he had no shots on net during his time on the ice, he failed to impress the Canucks.  The very next day, they traded for another goalie, Maxime Ouellet.  McVicar would be sent down, not to the Manitoba Moose, but down another level to the Victoria Salmon Kings ECHL.  After a few more seasons in the minors, McVicar took his game overseas and finished his pro career in Europe.
That has to be bittersweet, playing 3 minutes in the NHL and never getting a chance to make a save.  Compound that by bouncing back and forth between the NHL and AHL and having the team trade for another goalie the day after the game.

For playing his single game, McVicar has eleven rookies cards.  One neat thing is you can see a change in the equipment and mask used by McVicar.  I am assuming the top cards feature a picture of McVicar in training camp.  He had played the previous season withe Columbia Inferno of the ECHL. 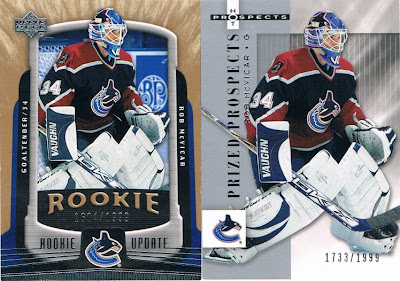 Email ThisBlogThis!Share to TwitterShare to FacebookShare to Pinterest
Labels: Canucks, Goalie, The Forgotten