One Star, One Sheet: Dale Hawerchuk 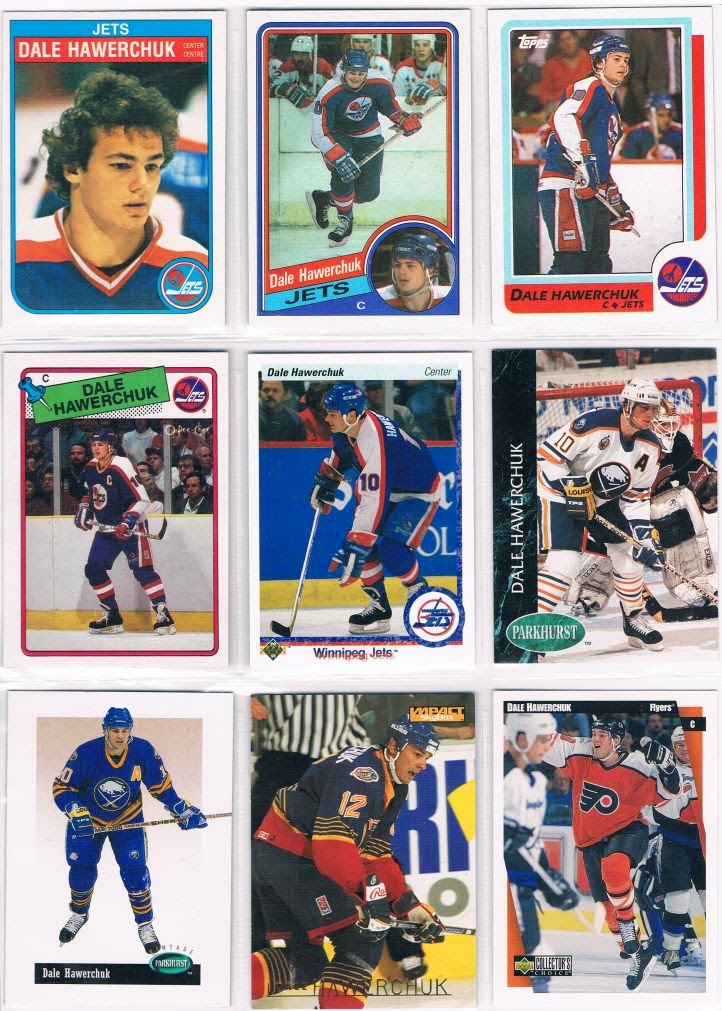 For a player who put up some gaudy numbers, Hawerchuk is not considered among the elites.  Perhaps it was because he wasn't flashy, played in a small Canadian market, or never had any play-off success.
Hawerchuk had plenty of success in his pre-NHL days.  He led the Cornwall Royals of the QMJHL to back-to-back Memorial Cups championships in 1980 and 81.  His dominating play in junior, 183 pts in 73s games in 1980-81, made him the clear cut number one pick for the Winnipeg Jets in the 1981 draft.
Aided by Hawerchuk, the Jets went from being worst in the league, with 32 points in 80-81, to a playoff team with 80 points in 1981-82.  At the time, it was the largest point increase by a team.  Hawerchuk became the 2nd rookie to score 100+ points and was awarded the Calder trophy.
Dale would led the Jets in scoring every season he was a Jet, never averaging less than  a point per game in a single season.  Hawerchuk's best season came in 1984-85.  He scored 53 goals and 130 points to finish 3rd in the scoring race. He was voted to the 2nd team All-stars and was a runner up for the Hart trophy.  Another highlight for the Jets in the 1984-85 season was having six players score 30 or more goals.  The 1984-85 Jets are only one of three teams to have accomplished this.
In terms of team success, the Jets only won two play-off rounds during Hawerchuk's years as a Jet, while losing eight, including five sweeps.  The Jets suffered from playing in the Smythe division during the 1980s which was owned by the Edmonton Oilers and Calgary Flames during that decade.
The hiring of Mike "Mikhail" Smith as GM of the Winnipeg in 1988, was the beginning of the end for Hawerchuk in Winnipeg.  According to Hawerchuk, “Mike Smith had come in and taken over as the GM in Winnipeg and was making some big changes, things were getting so bad in Winnipeg that I finally asked Smith to trade me.”  Which is a bit ironic since Mike Smith coached the 1980-81 Winnipeg Jets and helped cement the 1st overall choice in the 1981 draft for the Jets.  Smith went 2-17-4, as the third and final head coach of the Jets that season.
At the 1990 NHL draft, Hawerchuk and a 1st round pick, was traded to the Buffalo Sabres for a Phil Housley, Scott Arniel, Jeff Parker and the Sabres 1st round pick.  The Jets would select Keith Tkachuk and the Sabres took Brad May.
Hawerchuk was no longer the 100+ point man he was in Winnipeg but still put up a point a game or better in his first four seasons with the Sabres until an injury plagued season in 1994-95.  Even though the Sabres were a more talented team than the Jets of the 1980s, with Pat Lafontaine, Alexandr Mogilny, Grant Fuhr and Dominik Hasek, they fared no better in the playoffs.  During Hawerchuk's five seasons in Buffalo, the Sabres won one play-off round while losing five.
After the 1994-95 season, Hawerchuk signed a free agent contract with the St. Louis Blues.  Hawerchuk was reunited with coach Mike Keenan, who had coached Hawerchuk in two Canada Cups and also in Junior B when Hawerchuk was only 15 years old.  Hawerchuk struggled to put up points with the Blues, netting 41 in 66 games before being traded to the Philadelphia Flyers.
Hawerchuk played two season for the Flyers before retiring due to a losing battle to hip injuries, which had plagued him for a few seasons.  He finally played a NHL game in May, as the Flyers went all the way to the Stanley Cup finals in 1997, before getting swept by the Detroit Red Wings.
Hawerchuk would later go into coaching and is currently the coach of the OHL's Barrie Colts.
So once again, where does Hawerchuk rank in terms of greatness. If you consider his point totals and then consider the team he had to work with during his prime years with the Jets, you can't help but to be impressed with how many points Hawerchuk amassed.