After getting unbanned from Dave and Adams Cardworld, I was able to get my order processed.  One of the boxes was a 2011-12 Donruss Elite.  This would be my second box of Elite.  I bought one at the Toronto Sportcard Expo back in May.  I wasn't really impressed but the prices has dropped on Elite and I wanted to get the base set.  I really like the card design.  I decided to get another box. 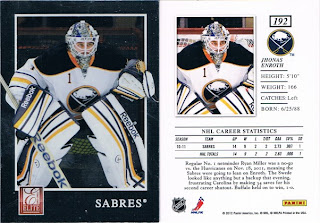 The scan doesn't do the card justice.  I love the shiny silver frame.  I even like the back of the card.  Unfortunately, I did not do good with the base.  I got more doubles than cards I needed.  I have 120 out of 200 and will need to make a decision about whether (and how) to go for the rest of the set. As the for the non-base, I prefer to skip the inserts and parallels.  Not impressed at all with either of them.  There are several insert sets but they all seem to appear to be the same.  The only good part is that they have several 6 cards insert sets of a single star player.  So at least you get a good chance of getting a star player. 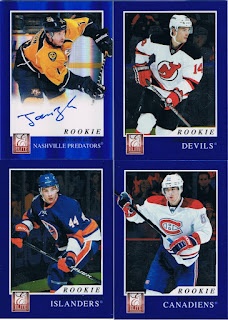 While I like the design of the RC, what I find disheartening is the lack of resale value.  Not that I base everything on what it goes for on eBay, but when you spend $80+ on a box, or $110 like the first box I bought, you'd like to check on the cards you got and at least see that you could get half your cost back for them.  The Adam Henrique goes for less than $2 on eBay, same with the Blum auto.  My other disappointment is that while the non-auto rookies are numbered, they didn't bother numbering the auto'd RCs. I am not impressed by the New Breed jerseys/patches/auto, I got two in the other box as well.  The white swatch on the Palushaj card is dull city.  The Vincour has huge seam and is the prime variation, numbered out of 25.  I wish they could have filled the blank spot with something, maybe the team's logo.  I know that they basically printed the same card front for the auto variations. 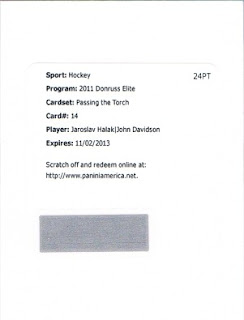 The biggest hit in the box is a redemption of a dual auto, Passing the Torch, Jaroslav Halak and John Davidson.  Debating on what to do with this one.  I think it'd be a cool card but I am not a big fan of either player.