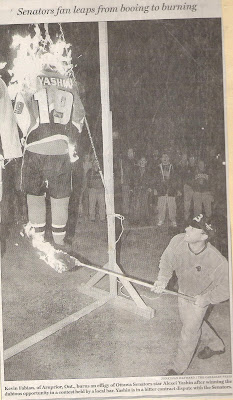 Alexei Yashin is often best remember for his faults as opposed to his skill.  Yashin has been villianfied for his contract disputes with the Ottawa Senators and then used as a whipping boy for his lackluster performance after signing a monster contract with the New York Islanders in 2001.

In 1998-99, Yashin set career highs in goals, 44, assists, 50, and points, 94.  He was the runner-up in the Hart Trophy voting, and was a 2nd Team All-Star.  Yashin followed up his career season, by holding out the entire 1999-2000 season, which was the last season on his contract.  Yashin had also held out on 1995-96.  After missing the 99-00 season, Yashin attempted to claim his free agent status.  A NHL Arbitrator refused Yashin claim as free agent, until Yashin honoured the final year of his previous contract.  Yashin would play one final season as an Ottawa Senator, leading the team, and league, in the most disliked player category.  Thankfully, for Ottawa Senators fans, the New York Islanders has a GM named Mike Milbury.  The Islanders traded Bill Mucklat, Zdeno Chara and the 1st overall pick in 2001, Jason Spezza, to the Senators for Yashin.  Milbury then signed Yashin to a 10 year, 87.5 million dollar contract.  Yashin never lived up to Islanders investment and his contract was bought out by the Islanders after 5 season.  Although Yashin hasn't played in the NHL since 2007, he has attempted a few comebacks with the Senators and Islanders, most recently in 2011.  Surprisingly, none of his comebacks have gotten past the contract negotiations.

While I remember the off-ice drama Yashin created, I will always remember watching him play in person.  I saw the Senators play the Tampa Bay Lightning during the 2000-01 season.  Yashin had the puck on a string.  He was easily the best player on the ice, when he was in the mood.  If he would have came to play every night, he would easily be in the ranks of Yzerman, and Sakic; the player's whose contracts he compared himself to.