Bob Probert is know as one of the most feared fighters in the history of the NHL.  While Probert's career started in 1985-86, he never got a rookie card until 1988-89.  Normally I wouldn't bother making a Lost Rookie for a player who had his actual RC a few years later and while with the same team, but I had a request for it on a hockey card forum.  It can be hard trying to to find a "rookie" picture of a player who spent several years with his first NHL team.  You may have already seen this card at Drop the Gloves.  He sent me some free cards, so I included this card in the batch I sent back to him. 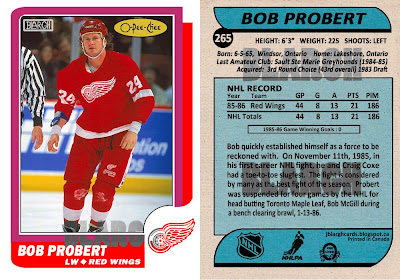 While Probert turned heads early in his career with some entertaining and impressive victories against some of the toughest enforcers in the NHL, it was his 1987-88 season which really put Probert on the path to stardom.  Probert led the NHL in PIM with 398, but also had 29 goals, 33 assists and 62 points.  He was selected to the All-Star game and became the only player to have 15+ power-play goals and 300+ PIM in the same season.  He also led the Detroit Red Wings in scoring during the play-offs.
The following season was a polar opposite for Probert.  After collecting 6 points in the first 8 games he player, he would be scoreless for the next 17 games.  Probert, who had already been suspended twice by the team, was suspended by the NHL following being arrested for drug smuggling.  A search had found 14 grams of cocaine in Probert's underpants while he was trying to cross the Detroit/Windsor US/Canada border.  Probert was forced to spend some time in jail and rehab.  He didn't play in the NHL for over a year.
In 1994, Probert again found himself in trouble off the ice when he crashed his motorcycle while driving under the influence.  Probert, a restricted free agent, was waived by the Red Wings, meaning the Red Wings even gave up the right for compensation if Probert signed with another team.  He would sign with the Chicago Black Hawks but would miss the entire lockout shortened 1994-95 season.  He was not allowed to play in the NHL until he completed rehab.
Reinstated by the NHL for the 1995-96 season, Probert would have his last 40 point season in his first year as a Black Hawk.  While still a feared enforcer, Probert's point and penalty minutes would decrease over the remainder of his career until his retirement in 2002.
Probert would continue to have legal problems in the years to come, including getting tasered during one incident.  In July of 2010, Probert passed away due to heart failure.  He had been working on a book before his death and it was released in late 2010.  It was called Tough Guy; My Life on the Edge.

We can't talk about Probert without showing at least one fight.  Here's the fight mentioned on the Lost Rookie card; Probert vs Coxe, Round 1.  They don't throw them like that anymore. No defense, all offense.