Don Cherry has been involved with hockey for the past 60 years.  From player to coach to analyst.  Although some would agrue he's more of a loudmouth ass than an analyst.  Love him or hate him, no one can argue about his passion for the game of hockey, or the passion he has for his country or fans.
On October 18th I sent Mr. Cherry one card and a picture, an 88-89 OPC Tribute.  I also included an extra of the picture for him to keep, which he did.  One December 12th, I received my 2 items plus an additional 2 items.  No Hockey TTM collection is complete without a Don Cherry autograph.  Thanks Don. 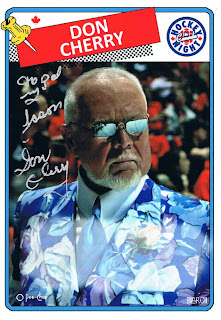