Jim Peplinski played 711 games with the Calgary Flames.  He won a Stanley Cup in 1989 and took time off in 1988 to play for Team Canada at the Olympics in Calgary.  He retired in 1990.  He re-retired in 1995 after a six game comeback attempt.  Mr. Peplinski has found success after hockey, running several car dealerships and also being a co-chair for the 2012 IIHF World Junior Championship.  I sent Mr. Peplinski one card.  He returned the signed card, a signed 3.5 x 5 card and his business card. 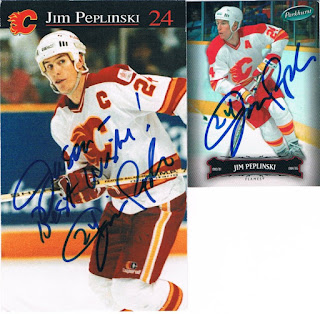