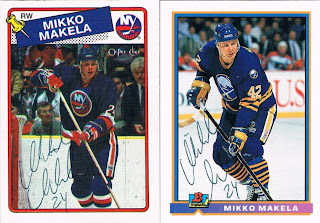 Mikko Makela scored 265 points in 423 games.  He had his best season in 1987-88, scoring 36 goals and 76 points.  He played with the New York Islanders, Buffalo Sabres, Los Angeles Kings, Boston Bruins and also spent several years playing in Europe.  Mr. Makela is currently a teacher at the Warner Hockey School in Alberta.  I sent two cards on November 3rd and received them back on November 25th.