Isn't it strange how a young hockey fan can attach themselves to a player, seemingly at random?  Stephane Beauregard was one of the players I cheered for a young kid.  Beauregard played 5 years in the NHL, but never posting a winning season. Beauregard's biggest claim to fame was being part of the package, along with a 4th round pick (Eric Daze), Buffalo used to snag Dominik Hasek from the Chicago Black Hawks in 1992.
Mr. Beauregard signed both cards with the #30, even though he wore #35 during his one season with Philadelphia.  Never the less, he has one of the nicer signatures I have received back to date. 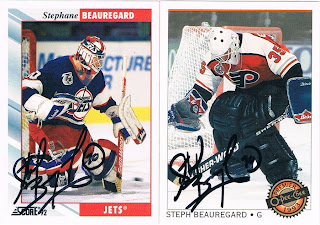