Gary Bromley is best remember for his mask as opposed to any success he had on the ice.  Bromley played 136 NHL games, 67 in the WHA and won an Avco Cup in the WHA.  But it's his mask which inspires the interest in this goalie's career.  Unfortunately, OPC really dropped the ball on Gary Bromley cards.  His 1979-80 card pictures Glen Hanlon and his 1980-81 is actually Curt Ridley.  His mask finally got on a card in an ITG release in 2009-10.
Mr. Bromley signed 1 of 1 and kept the extra picture as offered.  Even even wrote a note thanking me for the picture. A fantastic return. 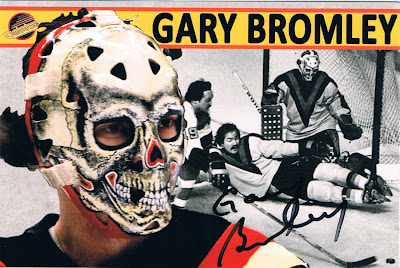