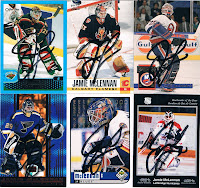 Jamie McLennan played 254 NHL games over 11 NHL season.  He was a career back-up goalie who had his best season with St. Louis.  In 82 games with the Blues, McLennan was 38-27-8, with a 2.20 GAA.  McLennan is an analyst on TSN, the NHL Network, NHL radio and writes for The Hockey News.  I sent the cards to The Hockey News.  I sent him 2 cards to be signed; he returned 6 signed cards.  Perhaps it was because I forgave him for playing on the NY Rangers.