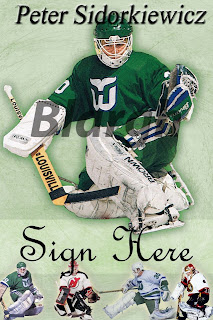 Peter Sidorkiewicz was one of my favourite goalies when I was a kid.  He had a few good years with the Hartford Whalers before getting selected by the Ottawa Senators in the Expansion draft.  While he did a few highlights, such as an All-star appearance with the Senators and beating the Montreal Canadians in the Senators season opener, he was traded to New Jersey in the offseason and only played 4 more career games.  He had a bit of bad luck getting to New Jersey the same season Martin Brodeur made the team.

I pulled the main image of this custom off a 91-92 Upper Deck card.  The other images I gathered from the net.  It is meant to be printed off as a 4x6 photo.  I made a spot for him to sign and I hope Peter rewards my efforts with a nice auto.  I sent this card out on August 24th.
Posted by JGBlargh at 2:39 AM