I can't really call this my first TTM success since it was actually my girlfirend who wanted to try to get Daniel Briere's auto and wrote the letter, but I supplied the cards, got the address and first introduced the idea of TTM to her, so I still consider this a TTM success for me as well.
We live in the Arctic circle, and on our holidays in May, we planned it around going to see the Flyer play.  For our trip, we were in Philadelphia for Game 5 of the Bruins-Flyers series.  And that was a problem since the Flyers were swept in the series and they never made to a game five.  One thing that amazed me was that we couldn't even find game four on TV, and the few bars we tried were showing a Bulls-Hawks basketball game over the hometown Flyers.  It was almost like the city had mailed in it just like the team did in that series.  (Oh no, I'm not bitter.) On the flip side, I couldn't believe how many Phillies jerseys and shirts I saw.  It must be crazy there during the baseball play-offs.
Shortly after leaving Philadelphia, my girlfriend wrote the letter and told Mr. Briere how we went the Philadelphia just to see him player but never got the chance.  Did he read the letter?  Maybe.  Maybe not.  The SASE only contained the two cards we sent him.  They were signed and what a beautiful signature he has.  The Pinnacle card has a corner ding but my girlfriend was over the moon when she got these back.  She already plans on sending out more TTM. 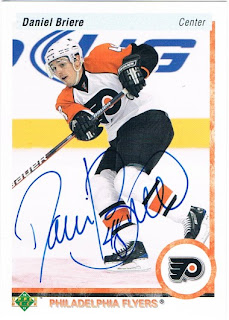 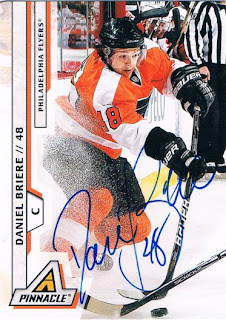